Text description provided by the architects. The Lake Wilderness Elementary School project began as a modernization to an existing campus of aged buildings and portables. The design process brought opportunity to fully transform the campus to provide a new 94,000 SF, two-story building designed for 850 students.

To strategically allow the former school to remain functional during transition, the new building occupies the site of former playfields. Lake Wilderness now sits toward the rear of the parcel, on an upper plateau of the bi-level site. In plan, its curved circulation spine is joined by four radial wings. This layout tightly knits four facades at the public side, and fans out in the back to invite light and views to the interiors.

The rising population of the Maple Valley region actively contributes toward the status of Lake Wilderness Elementary as one largest in the State. Future growth is anticipated within the building’s floor plan. Ground-level voids offer semi-sheltered outdoor spaces, ready to be infilled as classrooms as the need for incremental growth arises.

The spirit of the project is revealed in its appropriate scale and thoughtful vernacular, which emerged as a response to the residential context and large program size.  Courtyards are nestled between simple, efficient “learning neighborhoods”. The building employs strong, simple gable forms relating to the adjacent neighborhood. Brick cladding provides in impression of quality and permanence.

Inside, Lake Wilderness guests, students and staff are greeted by child-like design elements. Playful iconography, acoustic art installations, and strategic blocks of color foster a sense of whimsy. The interior scale of the school is reduced to environments of playfulness, intimacy and wonder. 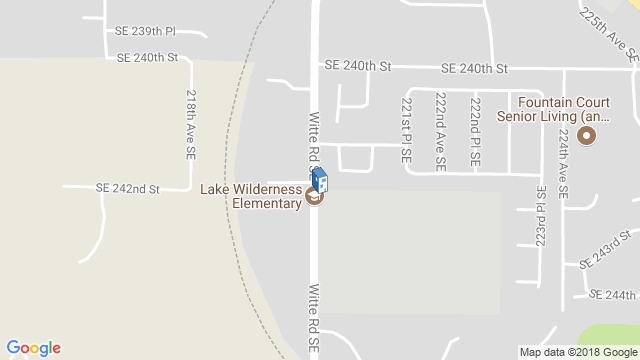 Location to be used only as a reference. It could indicate city/country but not exact address.
Share
Or
Copy
About this office
TCF Architecture
Office
•••