Art, in general, is produced to be seen or experienced by another, an interlocutor, who, in turn, establishes various relationships with the work. However, this does not appear to be the case with the Bataan Chapel, built by the Swiss artist Not Vital in the Philippines.

Punished by constant winds, the work rises on a hill in rural Bagac, a town of just under 30,000 inhabitants located about 50 kilometers west of Manilla. The remote location of the installation makes it difficult to access and makes the journey a task that takes on the air of pilgrimage—part of its grace lies precisely in its inaccessibility.

Built under the patronage of the non-profit artistic foundation Bellas Artes Projects, which was created by Jam Acuzar in 2013 and is directed from the Las Casas de Acuzar resort in Bagac, the Chapel at Bataan is not, despite its name, a work dedicated to Christianity. Although it houses a porcelain sculpture entitled The Last Supper—reproduced by Vital from a painting of the same name that he completed in 2015—the presence of a sculpture dedicated to the Philippine rice goddess Bulol, carved by the Ifugao tribe and affixed to one of the inner walls of the chapel, deprives the installation of any Christian meaning.

Vital considers the project in Bataan the latest in a series of surrealist works built on remote sites around the planet, which includes works in Tschlin, Switzerland, and Agadez, Nigeria. [1] Obviously architectural, the Chapel in the Philippines is one of those pieces produced in the contemporary art world that are located not within a precise disciplinary field, but in a kind of limbo between the fields of art and architecture.

"Is it art? Is it sculpture? Is it architecture? I don’t know. I'm not an architect, I never went to architecture school. That's why I'm so free to do this," commented the artist in response to the attempt to categorize his work. [2]

It is tempting to put this and other works of Vital in a category of buildings alongside such works as the San Bernardo Chapel by Nicolás Campodonico (2015, La Playosa, Argentina) and Peter Zumthor's Bruder Klaus Field Chapel (2007, Mechernich, Germany). The work in Bataan shares with Zumthor's design not only the "chapel" designation, but materiality, physical isolation, a dramatic interaction with the landscape, its narrow point of access and, ultimately, the mystical atmosphere created by the amalgamation of these factors.

As in the design of the Swiss architect, Vital's building was built in exposed concrete and presents a non-archetypal yet strong geometry that makes it a highlight against the natural backdrop. Visible from miles away, its volume is composed by the combination of a trapezoidal and a stepped prism; at top of the first, a longitudinal slit brings a dramatic beam of sunlight into the interior, while on the opposite side, a door—just large enough to fit one person at a time—is the only entrance to the Chapel.

The interior should, according to the original design, be softened with a layer of plaster, but the impression left on the raw material by the shapes of coconut trunks convinced Vital to give up the idea. [3] The interior of the Chapel could be compared to other so-called brutalist spaces, if indeed there was a consensus to call the work of Vital "architecture" at all.

As you pass through the door, the viewer sees, on the opposite wall, a large white ceramic mural measuring 12 x 5 meters with thirteen black stains—The Last Supper. Between the work and those who contemplates it, a shallow layer of water that begins 20 centimeters from the door pays homage to the rice fields of the Philippines; to the right, Bulol leans a few feet above water level, while the left wall remains untouched.

The experience is completed by the light changes made possible by the cut in the concrete above The Last Supper. Depending on the time of day and the weather conditions, the luminosity changes from a soft, diffuse light to a sharp contrast, roughly altering the perception of the internal space and the elements that constitute it.

Although he’s not an architect by training, Vital's intention to create an atmosphere through the design of space is noticeable in this work. Everything in the Bataan Chapel—from the material to massing of volumes, from location to texture—is evidence that there is, in the work of art, architectural design.

Defining precisely what this piece is may not be so easy, then. Art? Sculpture? Architecture? Maybe all of them? The artist himself is reluctant to commit to a specific category and, to tell the truth, this is not relevant. Perhaps the most relevant question is how a disciplinary field can be benefitted and enriched by works of this type, which are embedded in the undefined territory between fields.

In that sense, what is it that architecture can learn from the Bataan Chapel of Not Vital, and other works that deal with perception, sensitivity, tact, beliefs and, ultimately, a dose of mysticism? 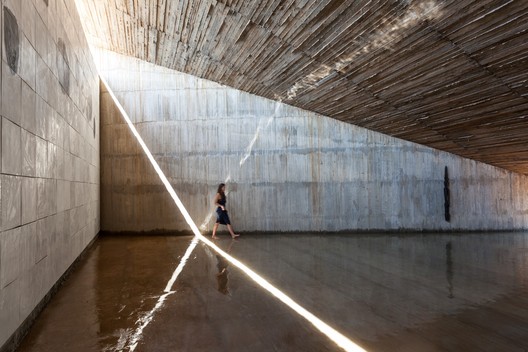