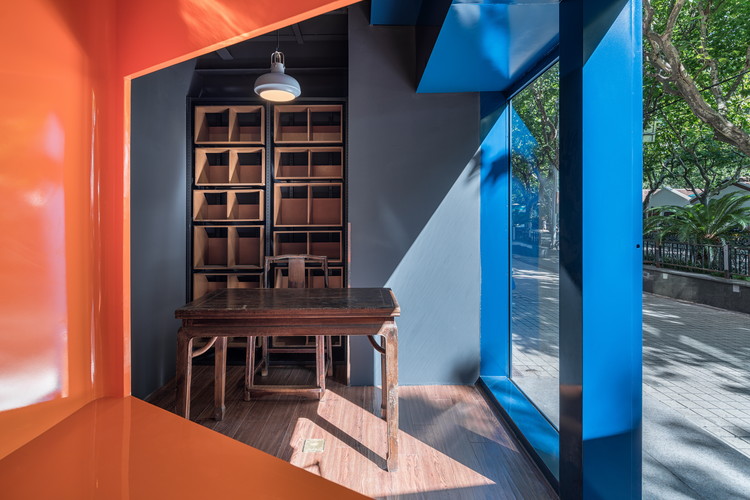 Text description provided by the architects. Under a narrow canopy, two doors are designed as one element, just like a butterfly with two butterfly wings. The two doors guide the visitors into two bookstores with different function and atmosphere. Like the two doors, the two bookstores are also nested in one 94sqm space.

One bookstore unfold books on Literature, History and Philosophy in zigzag deep corridors like a library, while the other one for general booklovers has been sculpted as a relaxed and charming reading hall.
Here, readers with different aims encounter with each other.

Guoquan Road
Yueyue/Zhida bookstore is located at No.525 Guoquan road. The west part of the lushly shaded Guoquan road belongs to the urban area of Fudan University: to the north is the Handan road campus, surrounded by gymnasium, publishing offices, SEM, living areas of students, also kindergarten, primary school and high school that are affiliated to Fudan University.

Guoquan Road used to be famous as a place with lots of literature bookstores. With the rise of online bookstores, most bookstores on this road disappeared, just like all the other bookstores. In recent years, however, there has been a new trend to build bookstores, and mostly in the mode of "bookstore +". The consumption upgrade and the rise of lifestyle aesthetics in the city is the main motivator behind. In such an ordinary urban block as Guoquan Road, is it still possible to create a bookstore that is simple but with personality in both function and details?

Two bookstores
ZOU Bin and LUO Hong run a successful online bookstore together.  Besides online store, they has been operating this bookstore on Guoquan Road for more than 10 years. Because of the market change as mentioned above, this bookstore had been under greater and greater pressure. Before renovation, it mainly sold supplementary books for students. The space had a limited height and a limited area; the plan had a cramped outline; even worse, the kitchen upstairs was always leaking.

This couple client both agreed to update and upgrade the store, but they had different ideas on the identity of the bookstore.  Zou wouldn't give up his interest in liberal arts; he wanted to run a bookstore focusing on literature, history and philosophy. While Luo was more pragmatic: considering the trend of the market, she would prefer to have a general bookstore, that could also hold activities such as off-line meet, parent-child activities, etc.  The designer thus proposed: why don't we build two bookstores?

The general bookstore requires a larger internal space to accommodate activities, while a bookstore for liberal arts could run in a narrow space like the library stacks. The way to organize and mix these two function is the key.

Metal Craft and Mechanical Design
For the bookcase, considering the flexibility of layout and disassembly, a standardized customized steel bracket was designed as its structure. Different color of black and white was adopted in the two books stores according to their different identity.

Each of the two doors weighs more than 300 kg. In order to make it work, we worked together with professional engineers and workers and studied the details of the door carefully. The two doors were installed and connected with one vertical steel shaft, forming a page-like relationship, so that you can open the two doors simultaneously. At the same time, the door shaft was designed with multi-layer bearings that were nested with each other, to avoid the deformation of the steel shaft, which might cause the doors unable to open smoothly.

To design a bookstore for books
A bookstore is a place for books, knowledge and ideas. To design Yueyue/zhida bookstore is to create a space for good books and booklovers. All strategies and details were to serve this purpose. 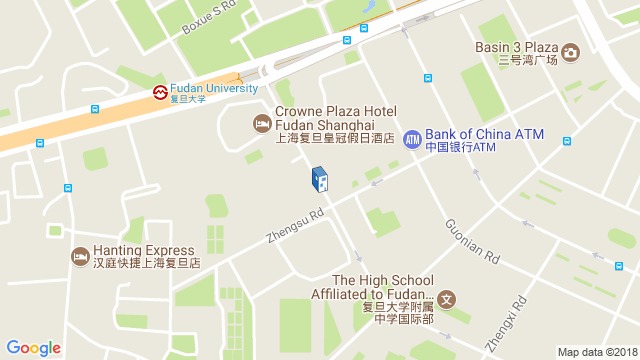 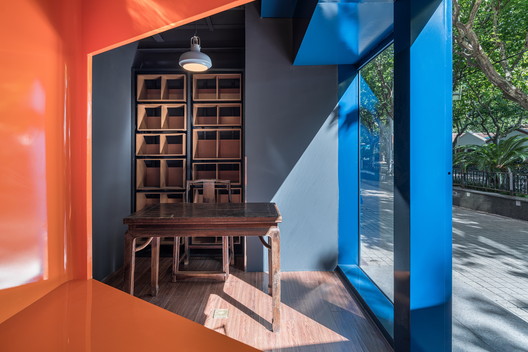