A speculative project, the “New York Super Slender” created by RB Systems, is a futuristic skyscraper that presents a potential new tower typology. With ever-diminishing land space in major cities and a vastly growing population, the project rises to the challenge of optimizing occupancy in a constrained and dense city center. 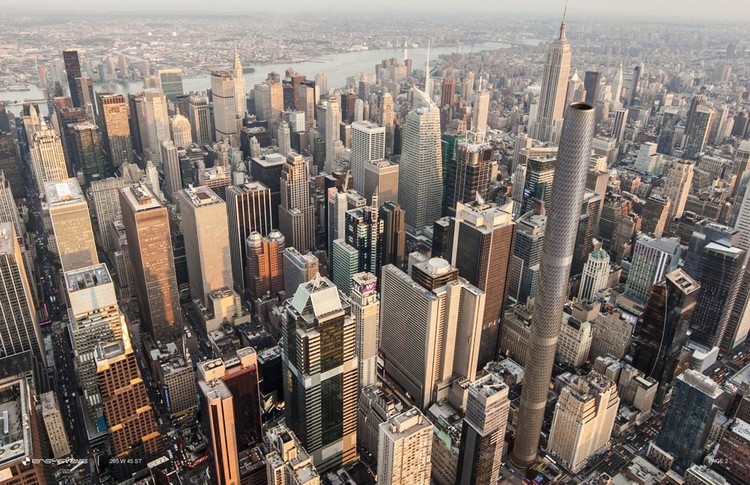 The tower has an approximately 30-meter x 30-meter footprint and rises 400 meters into the sky. It explores the elimination of perimeter columns, instead replacing their structural purpose with a series of steel cables that run and twist along the height of the tower. The cables are anchored in a deep foundation and tied back to the core at the upper structural ring, creating a force of surface tension that can be likened to the way candy is held in a wrap when the ends are twisted. This use of steel cables creates a solution which is light, yet sturdy.

Rustem Baishev of RB Systems describes his design method as a conception of architecture as a field of systems engineering, not a field of art. As such, the aesthetics of his project are rooted in the building’s structure, creating a sleek, minimal and futuristic volume of reflective glass. Design decisions are focused on the efficiency of the building as machine, with the cylindrical tube shape of the design being one of the most efficient forms of wind resistance.

The façade of the building is scripted using parametric software, with paired triangle panels wrapping around to create the curved surface of the tower. The boxes which the cables run inside of have integrated software-controlled rotating vents for natural ventilation and air conditioning, while the high-performance glass coating blocks excessive thermal gain.

One of the most distinctive parts of the design is the seemingly floating “Halo” canopy at the entrance of the building. This adds to the overall ‘futuristic’ condition of the project, further emphasized in visualizations of the smooth and white spaces of the entrance lobby and observation deck. The furniture of the building was also designed to fit perfectly as part of the tower’s integrated design approach. The spaces hold ergonomic, transformable desks and seats to suit the needs of the user.

The project creates futuristic spaces that begin to question current issues in architecture. Through innovative design, it offers a solution to creating smaller building footprints while accommodating a growing population.