Save
A New House and Studio / Anthony Carlile Architects 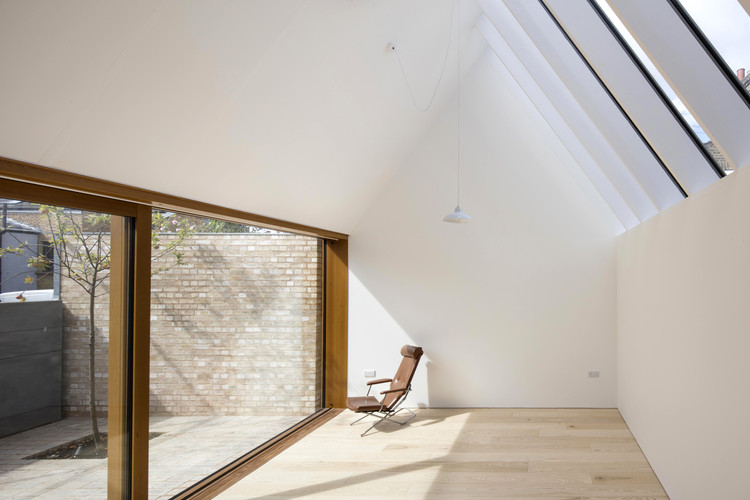 Text description provided by the architects. The site for the new house and studio lies at the end of a residential terrace in East London and for many years was occupied by a tumbledown brick storage warehouse and single storey garage.

Despite being in poor structural condition it was agreed that the brick warehouse was an attractive and charismatic part of the street and the new building was created around as much of this as could be saved. A new slab was cast inside to increase the ceiling height, a new studio was added to the west, new living accommodation was tied in and around the retained facade, original walls were re-built and the whole was re-roofed and upgraded to modern standards.

The site is surrounded at the rear by neighbouring gardens and one of the main challenges was to bring daylight deep into the building, particularly at ground level where there could be no openings in three of the four elevations.

Part of the solution was to provide the staircase with large, first-floor windows to bring light down to the spaces below. The open-plan arrangement that allowed this to work was made possible by using fire-rated roof lights which removed the need to enclose the stair.

The large windows also make it is possible to see right through the building and create a minimal connection between the new studio and the existing warehouse.

The plan of the building is simple and flexible with storage and utility spaces integrated around the stair. Each of the main rooms has more than one source of sunlight and despite the constrained location, the spaces are light. Large gates give flexible access from the street and the studio looks out onto a new courtyard garden with two new blossoming apple trees.