Save
“Doshi”: Documentary Explores the Pritzker Prize-Winning Career of A Modern Indian Architect
Share
Or
Copy

Below, you can watch all the movie's chapters as well as a brief summary of each of them.

The film begins by addressing the influence of Doshi in the creation of the School of Architecture known as the Centre for Environmental Planning and Technology (CEPT), one of the best in India. It also shows the project for the Institute of Indology, built in 1961 in Ahmedabad. With this concrete project, Doshi begins to explore bioclimatic strategies, working with the Indian climate. Going back a little in time, Doshi recalls the difficult times early in his career, both in India, with little money, and in France when he went to work for Le Corbusier where, he says, he ate bread with cheese and olives for eight months.

Doshi explains that his work is centered on the humility of observing, and eternally searching and learning from situations and memories that are clearly reflected in his works.

In this chapter, Doshi portrays the Indian culture as one that possesses an ingenious mind that always looks for more. It is a culture that has many ways of using the same ideas—whether in dress, music, or architecture.

Doshi: Chapter 4 - “You Are Representing God”

Doshi asks that architects consider all buildings as a temple to God, even a small house. In this way, it is not possible to think of architecture being carried out miserably. After this speech, the film some of his housing projects.

Doshi: Chapter 5 - “The End Result Is Not as Exciting as the Process”

According to Indian philosophy, the process comes first and not the end result, which will never be as exciting. In this chapter, the ability to invent is portrayed as a challenge. It shows how the final design comes from a long process that is the result of intense research—whether into something new or traditional—in order to reveal new inspirations.

Doshi: Chapter 6 - “Architecture is a Matter of Transformation”

Here Doshi shows us how Architecture is a matter of transforming ephemeral situations and conditions. It is not about decisions on paper, in the program, in materials or climatic comfort, but about the behavior and attitudes of people and how this is all sewn together. "Architecture serves to open doors, not one, but many."

Doshi: Chapter 7 - “Human Being, By Nature, Is a Warm Compassionate Animal”

Roots are fundamental, and in this chapter we are allowed to see a more personal side of Doshi through his visit to Kamala House, where the architectural details are confused with the familiar details since both adapt to the time and create a constancy.

Humanity has a lot to lose without social and cultural inspiration in public and community bodies. In this chapter, Doshi points out that recognizing our inheritance—what has already been given us through built heritage—allows us to think about the future through the past. New ideas of scale and different approaches are great responsibilities for architects. 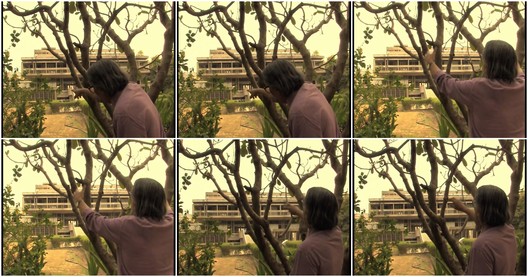