Save
Gentrification, Alienation, and Homelessness: What Really Happens When Amazon Moves to Town?
Share
Or
Copy

This article was originally published by Common Edge as "A Seattleite Reflects on the City in the Age of Amazon."

At first, it was just a crane or two, a little urban renewal down on Westlake, a rumor that Paul Allen was cleaning things up, wanted a huge park with bike trails. I thought that might be nice and didn’t think about it again for a while.

No park happened, but one day I went down to the new Whole Foods below where I work and noticed that a whole habitat had sprung up on Westlake, an expensive Mexican chain restaurant and an expensive Italian place and an expensive Thai place, and some expensive after-work bars. I also noticed small groups of men, all white or Indian and all wearing lanyards. These groups moved around the streets, talking animatedly, freshly out of their cubicles and going to lunch, oblivious to whomever else was on the street.

I noticed that the new restaurants and exercise studios and Italian furniture places and gaggles of lanyard-wearers looked strange surrounded by the Denny Triangle. At that time, five years or so ago, The Denny Triangle was down-at-heel. Junkies sat in corners and slow-moving police cars checked up on you as you walked past the auto leasing places and old stucco office buildings.

When the building started on Lenora Street, I felt less edgy walking up from the ferry. The new felt safer than what had been there, and though my favorite Modernist furniture gallery went and the place where the rich guy had a showroom for his cars was gone, it looked clean and everything, though I wondered where the junkies had gone.

In the next few months, my coffee place—a one-off run by an intensely handsome man of creole descent—closed. My sandwich place—run by an Asian couple—closed. The dance-lesson place run by the two Argentinians closed. The fix-your-computer place with the weird old guy closed. They didn’t reopen somewhere else.

About then, I noticed that when I was lecturing in the main campus building, it was becoming harder for my students to hear me, because of the constant sound of construction around us. At one point, five buildings were being built at the same time within a two block radius. We were in that first Denny Triangle demolition and construction wave. That razing and raising has not ended: today, it’s going on more fiercely than ever. When I look up from my desk right now I see three cranes moving over the surrounding blocks. The entire West Coast is experiencing a crane shortage because of the building going on in Seattle.

My students started to move farther away and have problems getting in on time because parking was getting harder to find. Now, instead of living in some funkadelic apartment on Queen Anne, minutes from the school, an Amazon worker now lives in the new building recently built there. My students have been moving farther and farther out. To Tacoma, to Edmonds. To Kent. They now often commute for an hour each way, and parking is impossible.

Seattle has no rent control. In the past five years, rent on a studio apartment on Queen Anne increased 48 percent. Seattle led the nation in rent hikes in 2016 and early 2017, according to Zillow. Meanwhile, behind the restaurants and office buildings, faceless apartment buildings—also modern, but grey with festive yellow or red lines, or two-tone, grey and dark grey, have risen in Westlake and along every thoroughfare. Rents have gotten so high that Amazon now gives its workers rent vouchers, to combat the price increases it itself has caused. My students don’t get rent vouchers. Neither do the artists, musicians, police, firefighters, retail workers, barbers, bartenders, or baristas who used to make up Seattle’s middle class. These people are now gone from the downtown core.

In the next two years, when I was walking back to the ferry from my job, I started to see whole blocks of old buildings being razed. Tall, black, featureless glass office buildings started to sprout—each with its de rigeur expensive restaurant on the ground floor, its high grey steel tables and wood grain walls and attractive small grouping of large-leafed plants out front. Each with its wall of expensive wines visible to the passerby. Each very much the same as the next.

Walking down to the ferry became hard for me. I felt pressure from all those black buildings. I found myself feeling isolated, lonely. I had never felt lonely walking to work before. There had always been something going on, whether music or shopping bustle or someone asking you to sign a petition or some weird looking person in that once-typical Seattle outfit of pink hair, parka, white petticoat and Doc Martens. But the street life is gone because the artists are gone.

After the black buildings began to loom, I started taking the bus to the ferry, rather than walking. On the bus, I started to notice other buses. Big, full-sized expensive coach buses—all white, with no markings and darkened windows. It took me a while to realize that, instead of bolstering Seattle’s rag-tag but effective bus system, Amazon had created its own pristine bus system for its own pristine lanyard-wearing workers. So much easier for them, really. A perk, you might say, not having to come face-to-face with Seattle’s poor people, its average people, or the commuters who aren’t... well, Amazon.

At the same time, down by the ferry, the tents started to appear. As a ferry commuter, I’ve always walked a gantlet of homeless people on the way out of the terminal. Ever since Alyeska laid off thousands of workers in the Seventies, Seattle has had homelessness. When I was first working in Seattle, about ten years ago, I’d notice homeless people hurriedly breaking down a shelter or rolling up a sleeping bag as I was walking past in the morning. But, in the last two years the tents have come to stay. Yesterday, on the way to work, I counted twenty-two tents in the median strip between the ferry and Western Avenue. A strip of tents right in front of the bus stop that Amazon has somehow managed to get in front of the ferry terminal. There is no public bus stop in front of the ferry terminal anymore.

At the end of January, Jeff Bezos, the richest man in the world, with a personal net worth of 121.8 billion dollars, commanded Alexa to open “Spheres,” three huge polyhedron conservatories in the center of Seattle’s downtown. Amazon employees can sign up to hold meetings there: And though they can look at an exhibit about them called the “Understory,” the public is not allowed in.

Bezos has made no effort to include the public in his Amazon world. In all of his buildings, he has made only one gesture toward the destitute, by housing an overnight shelter for 200 women and children in an Amazon headquarters building. Convenient, perhaps, to remind oneself of the good one is doing in the world, only not really. Seattle has the third largest homeless population in the country, a December 2017 article in the Seattle Times counted 11,643 people, 47.1 percent of which—5,484 people—are living without shelter.

Bill Gates put Microsoft in the Seattle suburbs for a reason: He could have a campus there without having to take up responsibility for Seattle’s urban mix. He could focus on the business of the business. There’s a civic responsibility inherent in purchasing the center of a city. Where is Amazon’s civic responsibility? Where are the places for real people, the support of people not like its workers? Seattle’s citizens are now outsiders in its own urban core. It’s “us and them” with Amazon. And the winner of the “HQ2” contest had better be ready for it.

Natalia Ilyin is a full professor of Design at Cornish College of the Arts, in Seattle. She is also Founding and Core Faculty for the MFA in Graphic Design at Vermont College of Fine Arts. Her next book, Writing for the Design Mind, is due out from Bloomsbury Academic in January. 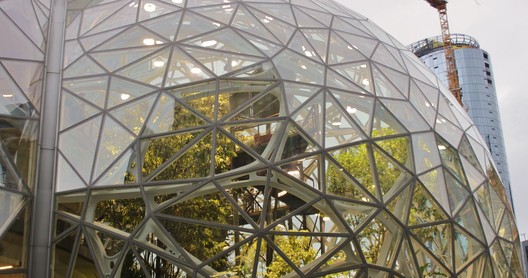