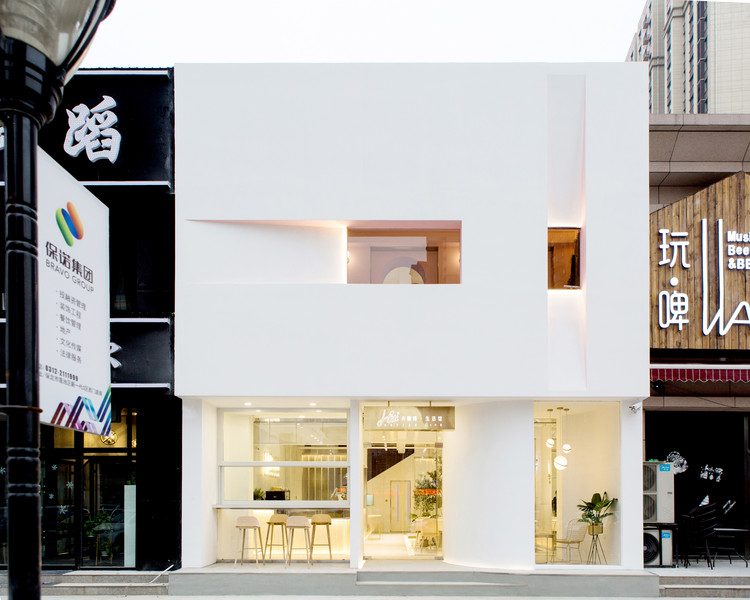 Text description provided by the architects. The street store project is located in a residential area in Baoding, Hebei Province of China. The shops with street frontage combined with residential neighborhood is common in the region. In such a city background, the attitude of intervention became start point of design concept.

Influenced by the Xiong An District policy, Baoding, like other fast growing cities in China, have built large quantities of tower residential communities, which contributes to the indifferent look of the city. People tend to hide into these buildings, being protected by iron and concrete, searching for a sense of security psychologically. As a result, interpersonal communication transformed from real life to social media, where ego is extrated from reality and enveloped by a non-homogeneous screen to meet and interact with others under disguise in this virtual world.

Depending on the people we meet with, the openness of oneself varies - in some cases the screen of both sides gradually become transparent as the relation grows deeper, making the profile of each other more and more clear, eventually they would enter the inner world of each other. In other cases, however, due to the difficulties in communication or contradictions in purpose, the screens become thicker, the egos are hidden from each other and finally go their seperate ways.

As most of us have to meet with different kinds of people, our screens are in a complicate dynamic process, changing from thick to thin, lucid to opaque, open to close. Endowed with the dimension of everchanging time, the screen between human relationships are like a four-dimension object - and our design is to cut it into slices and deduce the dynamic form of it within three-dimension space.

First, we created a simple, pure and transpant storefront, extracting the store space from chaotic surroundings. The store is designed as an intergral visual image in resistance of excessive signboards and advertisements of surroundings. At the same time, from carefully placed windows the multi-layer space of inside can be perceived.

I used several materials that varies in transparency and texture in the first floor, such as Ultra-white glass, Colorful glass, ground glass, mirror glass, U-Profile-Glass, glass brick. The glasses are used not only as divisions of space but also section slices of the four-dimension screen to redefine human relationships in the space. people move from one place to another in the space, with their perceptions of others changing among transparency, vagueness and reflection, the whole experience constructs new meaning of the screen. To people inside, it is also exploration of relations with theirselves and others.

After the cognition in the first space, people would enter a dim starry tunnel, the changing colour of which implies the character of second floor.

In the end of the tunnel is the second floor with warm colour. Through the porous metal wire and windows on the wall, multiple layers and interfaces of space can be seen, expressing a vague and ambiguous attitude. The surreal playground of second floor consists of a golden track, a prolonged ping-pong table, a vertical basketball court on the wall, a hanging miniature sliding pool and a summer swimming pool filled with bubbles.

It is as if the space is extended, compressed, or becomes unstuck due to the overturn of inherent human perception of scale and gravitation, and the screens between people have also vanished. At this time, people are freed from real and virtual world, entering the ego of each other, after fusion and reation there emerged a new form, eventually, the self awareness of human together with the space, achieved a transcedence to upper dimension. 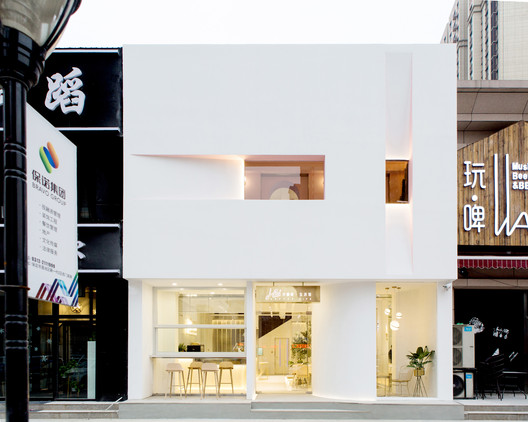