✕
Save
Who is Balkrishna (B.V.) Doshi? 12 Things to Know About the 2018 Pritzker Laureate
Share
Or
Copy

B.V. Doshi, one of modern Indian architecture’s most celebrated practitioners, was born in Pune, India in 1927. Nearly 90 years later, the Pritzker Prize jury chose Doshi as the 2018 Laureate. Get to know about Doshi’s history—including his close relationship to the legendary Le Corbusier—in this list of interesting facts.

1) Doshi’s office, Vastu Shilpa, created a list of “must-see” architecture sites in the city of Ahmedabad so that visitors to the office can see the city and understand the context in which Doshi creates his buildings.

2) From 1951 to 1955, B.V. Doshi worked directly for Le Corbusier as an architectural apprentice in his Paris atelier. To this day, at the entrance of his cabin, Doshi keeps a portrait of the Swiss architect next to representations of Goddess Durga and Lord Ganesha.

3) Le Corbusier spoke to Doshi in broken English. But the Indian architect later recalled, “When you don’t know the language, the conversation becomes more visual and spatial.”

4) He got his unpaid job with Le Corbusier based on a non-traditional qualification: his handwriting. Doshi told the India Times in 2017 that he wasn’t asked to submit a portfolio, but “an application in my own handwriting.”

5) He first visited America on a Graham Foundation scholarship in 1959.

6) Doshi was significantly involved in the design of Chandigarh, the new state capital of Punjab (Chandigarh now serves as a joint state capital for Punjab and Haryana). He was tasked with designing the living spaces for the thousands of humble government servants. This gave way to his continued interest in producing the best, basic and low-cost communal spaces.

7) In the 1960s Doshi opened The School of Architecture at Ahmedabad with an alternative curriculum, known from 1972 onwards as the Centre for Environmental Planning and Technology (CEPT). Louis Kahn served as an early adjunct faculty member!

8) A closer look at the structural aspect of some of Doshi’s work reveals a practical and widespread use of bearing walls—these thick walls serve as efficient thermal masses in India’s hot climate.

10) Doshi collaborated with Moshe Safdie and Iranian architect Nader Ardalan and Harvard professor Josep Lluis Sert to write Habitat Bill of Rights, submitted by the Government of Iran at the UN Habitat on Human Settlements conference in Vancouver in 1976.

11) The studio he designed in 1979 - 81 shows the progression of Doshi’s attempts to meld modern tendencies with traditional Indian methods. For Sangath he employed a local tradition of mosaics made of recycled ceramic tiles. 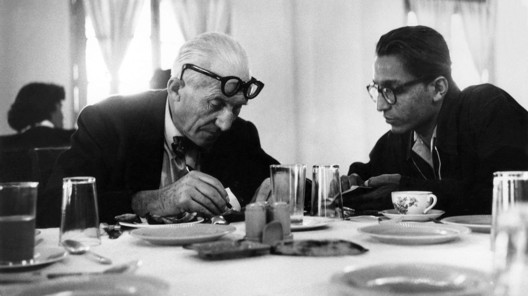