Save
7 Projects You Need to Know by 2018 Pritzker Prize Winner B.V. Doshi
Share
Or
Copy

Sangath is Doshi’s own studio, often considered the building that fully describes encapsulates his approach. It features a series of sunken vaults clad in china mosaic and a terraced amphitheater with flowing water details. Sangath represents the connection between nature and the individual.

This housing project for the Life Insurance Corporation in Ahmedabad was designed in 1973 and consists of 324 units in a duplex terraced unit scheme. It was designed to introduce a clear sense of order and combine both high density and low-rise: the result being a traditional urban row house of smaller units slotted into larger units.

An exploration of his interest in Brutalism, the Tagore Memorial Hall is one of Doshi’s most notable designs. Completed in 1966, this 700-seat amphitheater features reinforced concrete walls which are broken up by folded plates to create contrasting planes of light and shadow.

One of Doshi’s more experimental designs, this cave-like art gallery exhibits the work of artist Maqbool Fida Husain. Much like his Sangath studio, the domed structures that feature the artwork are covered in mosaic tiles. The artworks are applied directly onto the walls on the interior and metal sculptures rest against the irregularly shaped columns.

The recipient of the Aga Khan Award for Architecture in 1996, the Aranya Low Cost Housing Township was designed to establish “a sustainable society” where a mix of economic classes could live together. Situated on a rectilinear site of 86 hectares, this housing complex accommodates over 80,000 people in 6,500 dwellings.

Completed in 1966, The Center for Environmental Planning and Technology is designed to be an experiment for the perfect balance between humans and nature, with a series of buildings loosely held together by landscaped courtyards. It utilizes a free plan scheme with careful site planning to direct sunlight into the studios. Students were actively involved in designing additions to the campus with the goal to continue to promote collaborative learning across all disciplines.

Completed in 1983, the Indian Institute of Management in Bangalore explores the concept of designing both indoor and outdoor classrooms. The IIMB campus was envisioned as a place to be inhabited, as a place to facilitate the course of human interaction and reflects the perfect sense of scale, proportion, and light. Regarding this project, Doshi said “a campus should be meandering and connecting.” 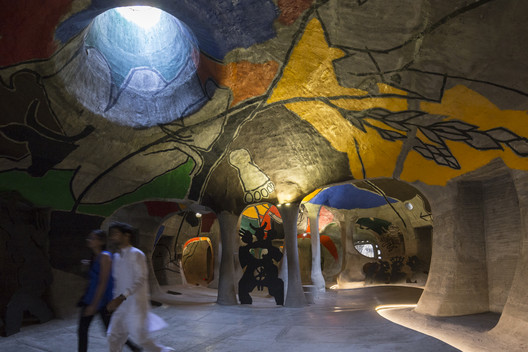