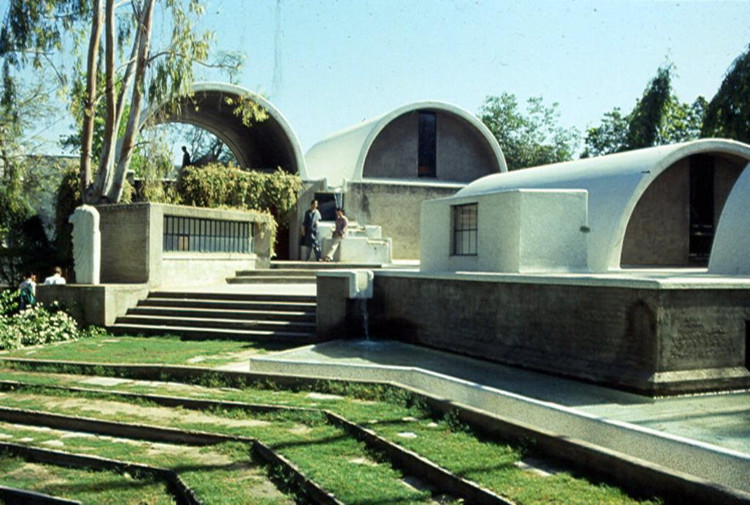 Text description provided by the architects. Balkrishna Doshi's own studio, Sangath, features a series of sunken vaults sheathed in china mosaic as well as a small grassy terraced amphitheater and flowing water details. Having been considered the building that fully describes himself, Sangath is a complete combination of Doshi's architectural themes from his previous work including complex interiors and structures, ambiguous edges, vaults and terraces. More about Sangath after the break.

Upon entering the complex, one immediately sees the silhouette of a vault lingering behind an exterior wall and a slight view of the interior is present through a small break in the surface.

The path turns and forces the occupant off of the north-south axis and alongside the elevated garden walls. Now visible in perspective, the vaults begin to recede into the background above the grassy amphitheater, water channels and gardens in the foreground. As one passes by the reflecting ponds that capture the vaults in still water the entrance is made apparent. It lies at the end of an angled approach to the vaults.

The main entry lowers the visitor a few steps into the a vault and proposes the choice of ascending a flight of stairs in a three story height, or proceeding through  small corridor by Doshi's office and into the main drafting hall. Here the ceiling plane rises as the inhabitant experiences how Doshi interlocks multi height spaces and creates compression and release between them.

The underside of the vault in the main drafting room is finished with a textured concrete that dispersed natural light into the space. At the end of the hall lies the opening seen from the site entrance and one regains their sense of place along the main axis.

Sangath also expresses Balkrishna Doshi's desire for a connection between nature and the individual. The overall form exaggerates the details of nature with its rolling mounds, cave-like spaces, terraced land, playful water channels, and reflective surfaces. Storm water in funneled through the site by the slick, round vaults and water troughs.

The sunken interior spaces are insulated by clay within the structure. Heat from the sun is reduced by grassy mounds and the white reflective china mosaic that covers each vault. Natural light is also filtered into the interior spaces during the day, while the moon is reflected in the ponds and across the china mosaics at night.

Along with natural connections, Sangath holds connections to India's culture. The layout resembles the way that a temple develops a series of stages into a final platform while the form loosely imitates the boldness of a stupa.

Other references to modern styles are also apparent with the Le Corbusier ear shaped pool; amphitheater steps resembling those by Aalto and Wright; Gaudi's broken china mosaic; and a water feature similar to that of Kahn's Salk Institute. 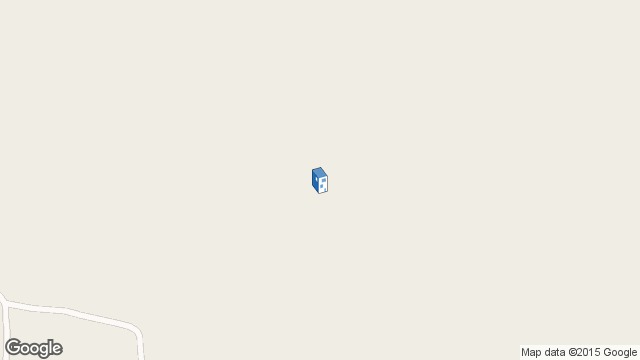 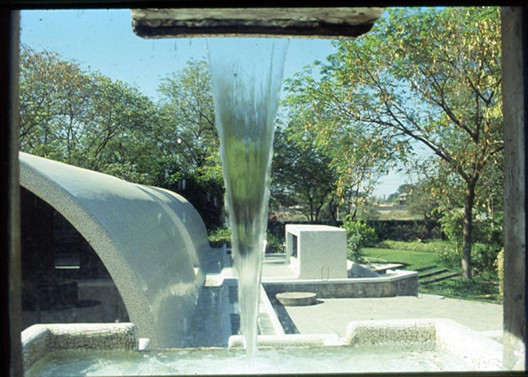 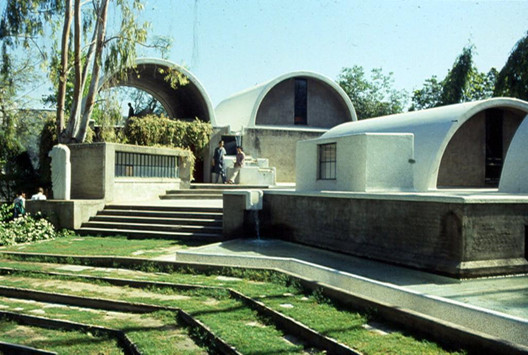