Acoustic shells are iconic elements seen in public spaces around the world. But beyond their curious form, their operation is highly interesting. Inspired by the design of the human ear, the sound waves produced within acoustic shells are organized by their form, becoming stronger and more vivid for the audience in front of the structure.

From a technical point of view, sound propagation is carried out by reverberations that, when created inside the shell, are directed by the concave shape towards the spectators. In other words, after a sound is made, it hits the shell and, due to the shell's carefully calculated form, is distributed to the audience. Another object that uses the same reasoning is the iconic Brazilian pay phone developed by the architect Chu Ming Silveira.

In the design of acoustic shells, each structure should be considered on a case-by-case basis, due to the spatial variations of each setting in which they could be used. However, they can generally be conceived as a geometric result of following a radius projected in three dimensions from a point in the audience, like a cone lying on its side. This point should therefore be about the same distance from every point of the concrete shell; however, varying geometries are possible that come close to this, and a successful acoustic shell could very well follow a folding geometry, or be created from geometries in a saddle or crest shape. Generally, they are formed by semicircular base and parabolic openings.

However, there are other factors involved in the proper functioning of acoustic shells. Usually, the ground outside the shell needs to be inclined, since this allows better visibility for the audience, and seating may also be arranged radially in an amphitheater form. Climatic conditions are also important for proper operation, since if the wind speed exceeds 15 kilometers per hour, this may cause disruption to the sound. [1] Environmental materials should also be considered, because certain natural materials, such as grass, partially absorb sound waves, while water surfaces are excellent reflectors.

Many architects, especially in the modern period, have developed iconic acoustic shells: Oscar Niemeyer, Henrique Mindlin, Décio Tozzi, among others. Nowadays, the system is applied to a lesser extent, since this model has been replaced by closed theatrical buildings, where the nuances of sound are controlled by more modern technologies. To provide inspiration, we have selected some acoustic concrete shells already published on ArchDaily: 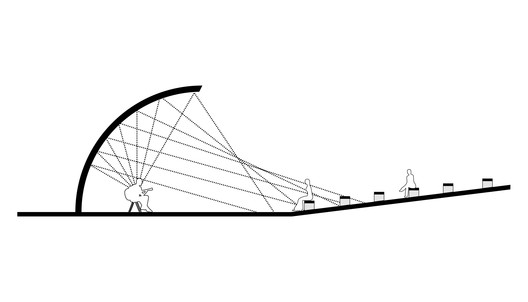