UNStudio has been selected as the winner of the largest ever private initiative architectural competition to be held in France – for the keystone ‘Centre Culturel’ of the new EuropaCity development currently being developed in the Triangle de Gonesse region just north of Paris.

As a brand new ground-up district, in 2017 EuropaCity launched a call for the design of 8 key buildings to be located within BIG’s competition winning master plan, including a concert hall, hotels, contemporary circus and exhibition hall. UNStudio was chosen to design the new Centre Culturel Dédié Au 7è Art, which will house a cinema complex and “cultural laboratory.” 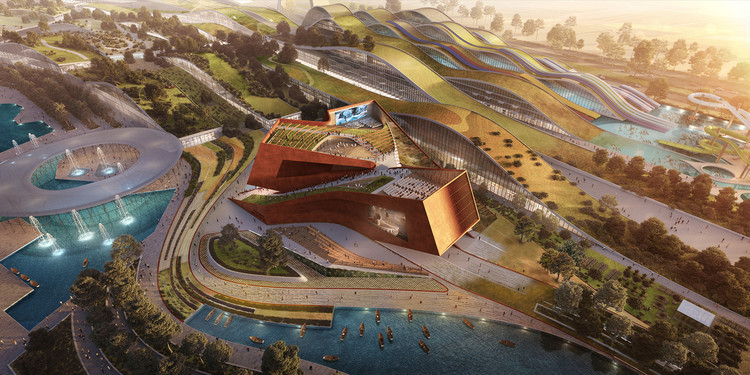 The complex features a variety of indoor and outdoor venues for enjoying cinema in both traditional and unexpected ways. Rather than simply designing a simple container for a theater within, the building is envisioned as a completely accessible public space where people can gather and relax. The expanded program will also include media and production facilities, restaurants and cafes, and viewpoints for 360 degree panoramas of EuropaCity and the Paris skyline.

“Cinemas are the perfect example of concealed architecture,” explains founding partner Ben van Berkel. “The cinema is the one type of building that becomes invisible once you step inside it. You spend up to two hours in a darkened room, immersed in the alternative space and time of the imagination…and then you leave. This limited user experience of the cinema as a venue led to the key concept that drove our design: the desire to create a building that in its totality offers a much more extensive experience of cinema.”

But the building also stands out, through its overall form and choice of facade material. Inspired by landscape sculptures, the weathered steel expresses a natural tone and familiarity. Perforations in the metal work in tandem with the overall form to harness natural winds and provide ventilation for indoor spaces.

The three “blocks” of the building are organized by film genre, allowing the space and the art to interact and heighten one another. At the center, they converge on a lobby that offers access into the theaters and glimpses into the production studios on the level below.

‘’For the design of the Centre Culturel we were inspired by the ‘Cinéma en plein air ‘ culture, and we wanted to celebrate the art of film-making,” says van Berkel. “We have created a building where you can both produce and enjoy film as a shared experience”