Architecture students of the American University of Beirut used an ephemeral design to approach the lack of awareness of marine biodiversity and responsible use of the coast of Tyre. The proposal consists of a lightweight and deployable structure constituting a programmatic point of meeting and information on the sand.

The project materialized with wood, metal ties and ropes, approach the possible application of light and temporary systems to generate a large social impact and at the same time minimum physical impact on the site.

From the architects. The Tyre region comprises Lebanon’s longest sandy beaches. The coast of Tyres is a popular nesting site for the endangered Loggerhead and Green Sea Turtles, as well as the home of several species of local wildlife, such as the Arabian spiny mouse and the Red fox. The Ras el Ain area contains Phoenician springs, and freshwater estuaries that outflow to the sea, creating a fresh water/sea water interface that is inhabited by a diversity of marine life. As of 1998, the Tyre Coast Nature Reserve declared 380ha along the coast a protected area.

The lack of awareness about the marine biodiversity and the importance of responsible use of the coast among the locals and visitors coming to Tyre is resulting in the severe destruction of habitat, and an increase in the endangered species of marine and coastal wildlife. Local environmental NGO’s are facing challenges when it comes to spreading this awareness.

Architecture AUB students from the DI-LAB (Design Impact Laboratory) teamed up with environmental consultants and with the Tyre Coast Nature Reserve and proposed to seize the attention of the users of the coast (both locals and visitors) by introducing a structure that acts as a hub for the Tyre Coast Nature Reserve. This center, located is directly on the beach, highly visible and public. It will be used as a meeting point, an info point, a presentation pavilion, an exhibition space, a training center, among other things.

The structure aims to examine how the possible application of lightweight and temporary systems can have a large social and programmatic impact while having the minimum physical impact on site, be it land or sea. The deployable scissors structure introduces a modularity and mobility to the design, which can be repeated in different endangered sites along the Lebanese coast, becoming an icon of environmental awareness. 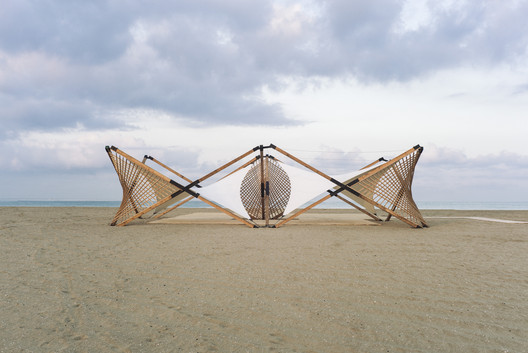