Earlier today, New York Governor Andrew Cuomo announced the 99-year deal that will allow World Trade Center Performing Arts Center, Inc. to lease the land for just $1 per year. In return, the Center will pay the Port Authority $48 million from funding to cover the cost of the building’s below-ground construction, which is already underway and scheduled to finish this year.

Of the building’s estimated $363 million price tag, about $295 million has already been raised, including a $75 million gift from the building’s namesake, businessman Ronald O. Perelman.

The center will be located between SOM’s One World Trade Center and Santiago Calatrava’s Transportation Hub. A performing arts venue of some kind has been in the works since Daniel Libeskind’s original masterplan for the site in 2003, including a scrapped design by Frank Gehry.

The Perelman Center is expected to be completed as soon as 2020. Learn more about the project in our previous post: 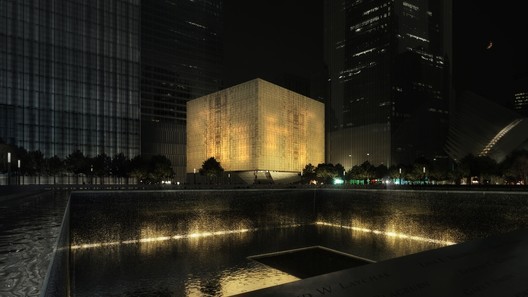