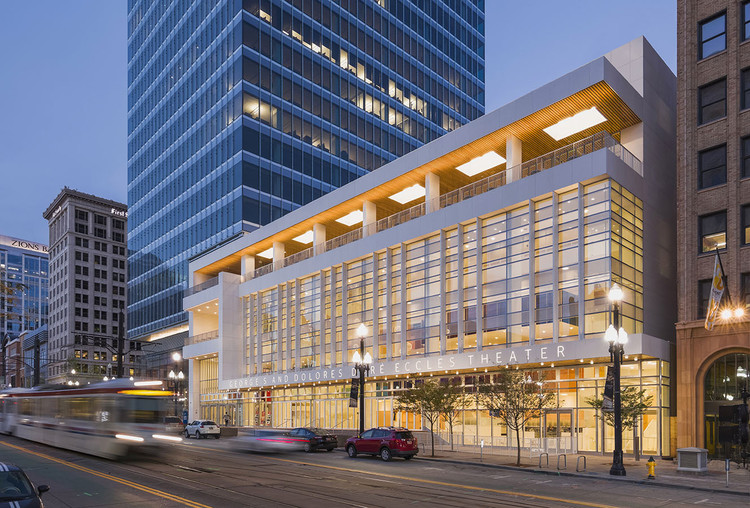 Text description provided by the architects. The George S. and Dolores Doré Eccles Theater began as an urban master plan designed by Pelli Clarke Pelli Architects for an entire city block in Salt Lake City. Multiple stakeholders, the Redevelopment Agency of Salt Lake City, and private developers were involved in enhancing the development of the area, which included placing an air rights office tower and a performing arts center on the same block.

In Salt Lake City, blocks average around 660’x660’—in New York City, the short side of the blocks average 265’. This provided a critical challenge in developing connectivity and the creation of active exterior and interior public spaces to invite pedestrians inward while maintaining the integrity of the city

After the completion of the master plan, the 2,500-seat, state-​of-​the-​art George S. and Dolores Doré Eccles Theater was designed as an urban performing arts center, celebrating the architecture of Salt Lake City and the landscapes and skies of Utah. In the tradition of other PCPA projects in cities like Charlotte, Cincinnati, Dayton, Chicago, and Madison. Each of these buildings is characterized by the need to create an important landmark identity and, most importantly, to enhance and fit into the city’s fabric. This challenges the designers to address the technical and architectural demands of a performing arts center while elegantly contributing to the character of the surrounding city.

The building has two major parallel “fronts” of differing but related character. From Main Street, visitors enter the theater lobby/winter garden, which has the ability open up to the street. The theater’s primarily glass Main Street façade recalls the architectural elements of Salt Lake City architecture. A large L-shaped frame of limestone, a material used in prominent Salt Lake City buildings, simultaneously separates and unifies the performing arts center and the office tower above it. A smaller frame defines the glowing and transparent lobby winter garden.

The Regent Street façade is more casual than its Main Street counterpart. Retail shops, the rehearsal room lobby, and the entrance to the Galleria surround the stage door, which would normally be concealed from view. On the south end of the building is the Regent Street Plaza, which doubles as a loading area and event space. The acoustically-glazed black box theater projects over the public space and the large loading gates. This functional space during loading and unloading converts to a lively event space at all other times, hosting parties, performances, farmer’s markets, and other public functions.

At the heart of the complex is the large proscenium theater residing off the main street lobby, which allows for accommodation of the backstage and other support spaces off Regent Street. This makes the tall lobby space highly visible to the street, creating an active urban presence. Site specific public artwork helps to energize the space. The theater itself recalls the terraced Utah landscape, a composition of warm colored panels, gold-toned perforated metal, and points of light that make the space sparkle. The ceiling looks like the night sky with tiny, star-like lights seemingly suspended in dark, acoustic material that conceals the banks of stage lighting and mechanical equipment above. 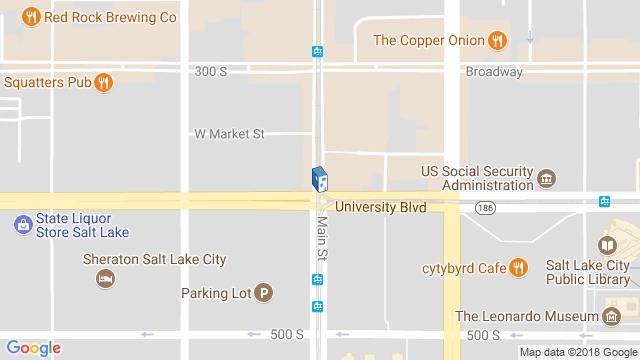