Construction continues on the undulating, futuristic 365 meter-tall Küçük Çamlıca TV (KCTV) Tower which is designed by MELIKE ALTINISIK ARCHITECTS in Istanbul, Turkey. The new telecommunications tower will replace several drab structures currently in use and support an estimated 125 broadcasting transmitters—becoming the tallest edifice in the city.

Featuring restaurants, exhibition spaces, meeting areas, a panoramic elevator, and a two-story observation deck looking out over the Bosphorus Strait, the new landmark structure is expected to draw an estimated 4.5 million visitors annually. The £36 million tower will be topped with 145-meter steel mast supported by a 203-meter concrete core which, as of early February, has reached 220 meters of construction.

While wind testing was employed to confirm the monumental structure’s overall stability, it was also used to develop the unique facade and optimize how the load of the building envelope would act on the concrete core.

By using specially developed algorithms devised a design that allows lightweight pre-fabricated glass reinforced concrete (GRC) panels to be attached all the way up the central column. These hang like a curtain and are securely clipped to the main central core to create large interior spaces.

The engineered facade not only provides structural optimization but allows for inhabitable space to radiate around the tower’s central concrete core. The facade was also engineered to reduce the duration of installation by integrating thin GRC rain screen panels stiffened by a steel frame and 3D printing the components for rapid testing.

The monumental tower is scheduled to be completed in late spring with the official opening slated for June 2018.

Edit: This article was updated on February 27, 2018 to reflect changes requested by the architect, including corrections to the actual height of the tower and authorship of the design. 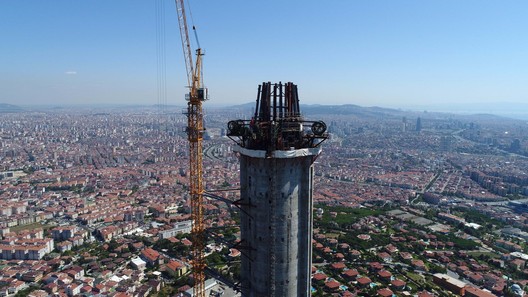