AIA New York and the Center for Architecture have announced five practices as winners of the 2018 New Practices New York awards, founded to identify and promote the city’s emerging young architects. Established in 2006, the awards are given biennially to practices headquartered in New York and in operation for 10 or fewer years.

Under this year’s theme of Consequences, firms were asked to submit portfolios containing design ideas that promoted “the capacity of architectural practice to offer transformative value within the broader context of the city.”

“In these uncertain political, societal, economic, and cultural times, architecture can often feel secondary, relegated to the margins, or perhaps even the superfluous,” explained the competition prompt. “Changing paradigms compound the already difficult terrain new practices in NYC must navigate. And yet, unstable circumstances offer an incredible opportunity to liberate architectural practice, challenge given assumptions, rethink established strategies, and develop new frameworks and ideas for the future.”

“For this year’s New Practices New York competition, we are looking for firms that choose not to remain on the margins but rather actively and constructively engage their city, their society, and their context. We seek firms that offer new modes of thinking, create opportunities for thoughtful architecture, and take agency as designers in NYC. How are you shaping your practice to have consequence? How is your practice shaping and transforming the built environment and its future? How does your work resonate beyond the boundaries of the profession? How do you choose to define your role and in what context?”

Founded by Tei Carpenter, the practice seeks out an expanded agency for architecture’s role in society, engaging both buildings and the systems beyond buildings. The practice is currently involved with three types of design work: non-profit, client-based built projects; competition-winning speculative designs; and self-initiated sponsored research fueled by a sense of optimism and the possibility for public engagement. Methodologically, the practice combines research, teaching, and design to engage in discussions within the discipline and more broadly.

MABU’s work focuses on the material, spatial, and environmental leftovers of others. Both by choice and by coincidence, much of the firm’s work re-imagines buildings produced by a modernity that has exhausted itself. The things we discard don’t just go away, nor are the trash heaps of history only filled with old junk. In this new era where everything has been altered by human activity, the MABU chooses to recognize old buildings as material and cultural resources.

NHDM is a collaborative practice for design in research in architecture and urbanism, founded in 2010 by Nahyun Hwang and David Eugin Moon. The practice strongly believes in the agency of architecture to articulate and address complex social, political, cultural, and environmental issues. Contemporary cities and their extended geographies serve not only as subjects of investigation but as sources of critical inspiration and fertile testing grounds for experimentation and transformation.

Only If is a design practice for architecture and urbanism founded in 2013 by Karolina Czeczek and Adam Frampton, AIA. Their work is based on an intimate engagement with construction processes, local policies and conditions, and cultural and community organizations. The firm translates urban techniques to an architectural scale to rethink qualities of duration and change. Only If believes that, rather than imposing additional complexity, the role of the designer is to envision simple gestures and forms to impose structure, coherence, and identity.

Founded by Miriam Peterson and Nathan Rich, P.R.O. advocates for an expanded role for design that crosses disciplinary boundaries. P.R.O. believes that design professionals are able to play the role of imaginative mediator, consensus builder, and trusted ally to multiple stakeholders simultaneously. This privileged role, one often overlooked by traditional firms, is not easily played by those outside of the practice.

News and project descriptions via AIANY

The American Institute of Architects New York Chapter has named six firms as the recipients of its New Practices New York 2016 award. Under this year's theme of "Prospect," the winners were selected for having "leveraged multiple aspects of the architecture profession, utilizing unique and innovative strategies, both in the projects and the practices they have started." 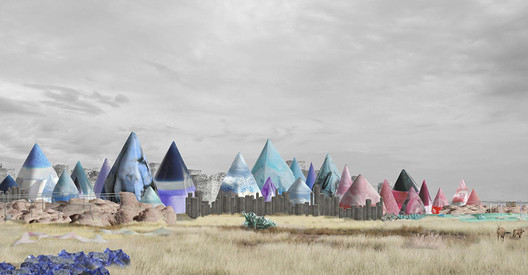