MVRDV has revealed the design of The Milestone, a new mixed-use office building to be built in the city of Esslingen, Germany. Featuring a distinct, part-reflective “crystal rock” facade and a hollowed-out pixelated core, the building will become a standout new landmark and public amenity for the city. 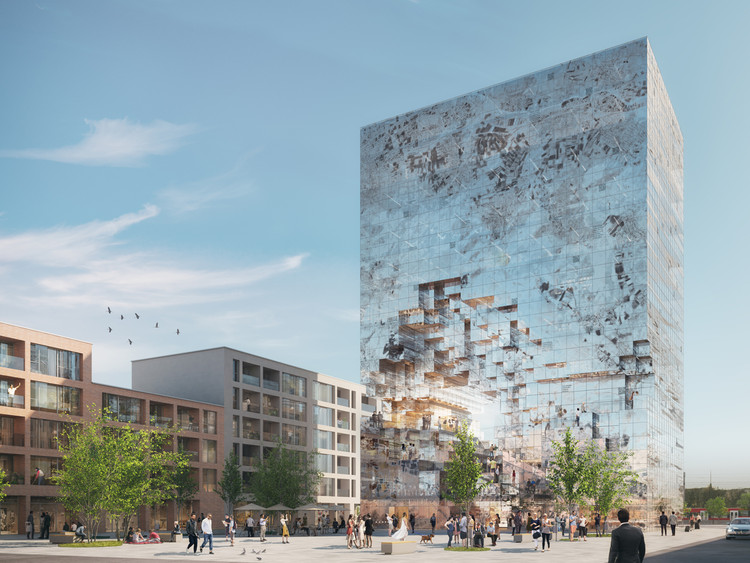 Located on a public square in Neue Weststadt near the central railway station, The Milestone will contain 70,000 square feet (6,500 square meters) of mixed-use space across 12 stories. Inspired by the city’s past and its future ambition, the design will feature reflective and interactive elements that will educate visitors and residents alike of the region’s culture and history.

“This building shows Esslingen to people all who pass by on trains and will become a new symbol to reflect its past heritage and future’’, says Winy Maas, MVRDV co-founder. “The façade with fritted glass will have QR codes integrated on to it informing visitors about Esslingen’s people, landscape, and histories which makes the building an interactive library for all.”

From the open plaza, the building steps up towards the ‘esslinger grotto’, an open walkway that punctures through the building and reflects in views from the surrounding landscape. Upper levels will contain flexible, light-filled office spaces, while ground level spaces will be occupied by public amenities including a cafe, restaurant and meeting spaces.

Perhaps the building’s signature element, the facade will utilize a range of innovative technologies to control the interior conditions of the building and produce energy.

“The Milestone’s part mirrored-transparent façade integrates technology and sustainability with the use of fritted glass to reduce overheating, PV cells to store and generate energy, and finally, QR codes which carry information about the city in a pixelated map spread across the building making it both visible and readable,” explain MVRDV. “The map, be located on the lower part of the building extends to a height of 40 meters, and with stairs and terraces, it forms a publicly accessible core that tenants and visitors can walk up to take in views of the vineyards and surrounding hills. All of these sustainability features in the façade all the potential for the building to become partly self-sufficient in future.”

The glass facade will also allow the building to transform between day and night – during the day, the reflective surface will make the volume disappear into the city, while at night, it will become a luminous beacon for Esslingen.

The project was commissioned by RVI Germany. Construction is scheduled to begin in 2020. 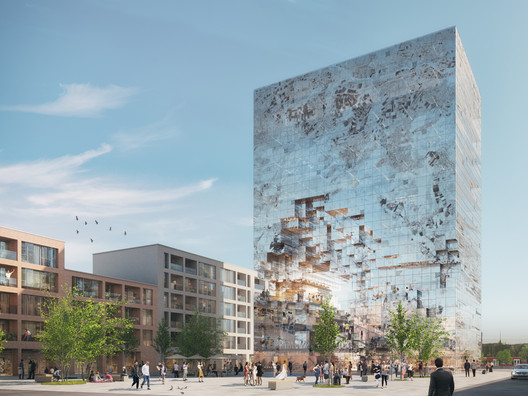