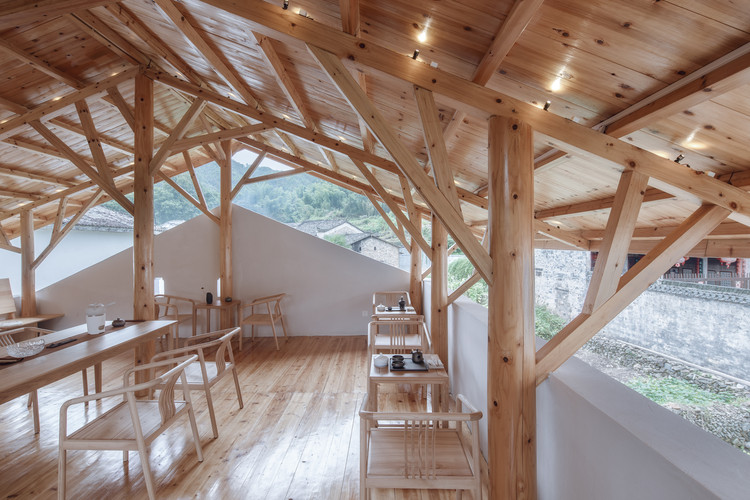 The envelope of the site
“TaoYuan Village” - The village titled "Taoyuan" is so numerous in China, since Chinese people always have a cultural complex on their hometowns from some fantasy literature, such as  "Where the forest ends, where the headwaters is; then the mountain shows", "The houses are dignified just like the extensive flat land", “No matter the aged and the young,everyone is slef-satisfied with joy”. The site of the λ house is located at a "Taoyuan" villages in the town called Shanli which in Qimen, Anhui Province. This "Taoyuan Village", originated a group family surnamed Chen that moved here since the Southern Song Dynasty. The ancestors of this family "see the beauty of the mountains and the waters, deeply loved in this land". This village hidden in the valley between two mountains, full with water sources and farmland hills, it is a gift land for living and multiply. After thousands of years, the pattern of a typical Huizhou village had been formed.

“Nine Ancestral Halls in One Village” - There are hundreds families in Taoyuan village that all surnamed Chen, there are as many as nine ancestral temples which are rarely seen. These temples recorded how flourish and wealthy this village used was in history. During Ming and Qing Dynasties, the merchants from Huizhou were throughout the country, under the influence of strong township consciousness and the nostalgia complex, it was a tradition to construct the ancestral temples and other public buildings when they returned home with fortune . Nowadays, due to the protection of natural environment, the original layout pattern of the village and the Huizhou style architectural appearance are still remain intact. Among them, the nine temples scattered in different location of the village have become the historic preservation buildings that still intact.

“QiMen Black Tea” - Due to the climatic conditions and business culture, there is always a tradition of making black tea in the area of Qimen, Anhui Province. The tea is exported to other places and the "Qimen black tea" has become a famous brand both in China and oversea. The historical local business “Cha Chang” that starting from the Taoyuan village in 1915, it used to participate in the Panama Pacific Expo in San Francisco, USA, and won the Gold Award for local tea farm business. Till today, the tradition of plant, product, taste and sale tea are still retains as the family business almost in every family here in Taoyuan village.

To conceive a design
The λ house is located on the side of a path leading to the village, close to Xu Wu Ancestral Temple (one of the nine ancestral temples in ancient China). Surrounded by farmland, relatively independent, the house is very small, covering only 60 square meters. The original structure has two floors, first floor with stacked farm tools and second floor in vacant state due to the low height wooden truss. The roof is an ordinary column-and-tie construction, but has been almost decayed while the wall is made in a local way, hollow bond wall.

What can we do in such a woodshed of only 60 square meters? Since the λ house is located in a public area, we envisioned two demands for her: On the one hand, as an origin of Keemun Black Tea, although there is black tea in every household, a special black tea experience museum has not been established in the village. Villagers usually sell tea directly in living room. Since there are no tea tasting, connoisseurship and appraisal, Taoyuan Village needs a space for tea ceremony show and tea tasting.

On the other hand, nine ancestral temples in Taoyuan Village were only used during important festivals such as worships.Villagers can only chat in groups in front of the lane. Therefore, we hope that it is also a more relaxed and daily public place open to villagers.

As a result, the function of λ house gradually became clearer: to build a daily and ceremonial teahouse in a two-layer, 60-square-meter farmhouse.

Arts and crafts
The old house has a long history, and her atmosphere has been fully integrated into this ancient village, so that her birth and aging are marked with old times. If we build a new house with advanced and modern techniques, we will be unable to demonstrate this sense of age.  A reserved house obviously is far better than a brand new one. So we kept intact the four facades of the old house, including rough hollow bond brick wall with white seam, old wood grilles, old fir door and the convex transom which is typical of Huizhou civil residence. Yet the worn wooden structure and the roof were reconstructed.

Fortunately, the roof of the old house and the wall are independent load-bearing system, making it possible to replace the roof without changing the fixed wall. However, the structural stability of hollow bond brick wall itself is relatively poor, and the internal structure needs to be strengthened so as to maintain its stability.In order to protect the old wall from being affected during the construction, before removing the internal wood structure, the workers first use steel mesh and cement to coat the inner wall surface with multiple layers to form the internal reinforcing layer of the old wall, and at the same time, to play the role of protecting the old wall. After that, the roof and the wooden frame were carefully removed.

After the wooden frame was removed, we re-arranged the column net in the rectangular wall, using the most common Chinese fir as the beam-column structure. On the first floor, a traditional column-and-tie construction is continued to use to support the floor plate. While on the second floor, employing Skeuomorphism, the wood structure roof is made a smart cantilevered crown-shape to cover and protect the old wall.

Eventually, the ground floor serves as a space for tea tasting. The dim introverted atmosphere of the old house is retained. The focal point of space indoors lies in an only deep color walnut long tea table. The fir beams and columns, vertical and horizontal normal, creates some kind of ceremonial atmosphere. The new fir column is purposely constructed in front of the old window opening, showing such an unobvious relationship between old and new.

Due to the rise of the roof, the second floor is left a gap. Therefore,the sense of confinement is completely changed. The gap between the new roof and the old wall allows for more interaction between the inside and the outside: the ancestral halls, idyllic and mountainous landscapes flow in different directions.With the roof as shelter, in the second floor public space, villagers can enjoy the familiar view of whole village from a new deck.

The shape of the architecture is like an old house covered with a crown, accompanied the ancestral hall with a new look. To strengthen the old house with new technology and to vest the newly built house with old look in a traditional method.Through the practice of "renewing the old architecture with new technology，vest the newly built house with old look," we have gained a mixture of locality and modernity.

Circumstances
The crown roof effect
The old wall is covered with crowned roof, which is called the λ house, an independent relic in the old village which brings people both familiar and unfamiliar imagination on the old village. Old things are sheltered, while the new house is born.

To see the sky in a covered space
Covered by the roof，the sky and external scene are both shaded by the eaves, which makes the old ancestral temple a motionless scene as if it is expanding horizontally in hand scroll format.

Meiren Kao (a chair wins its name for being sit by beauties and leaned along their back)
Meiren Kao is full of poetic architectural elements in the Huizhou civil residence. In a closed patio, the woman can only stay in the second floor of the boudoir, sitting or leaning against Meiren Kao, catching a glimpse of the visitors and looking outside. In λ house’s second floor, Meiren Kao is also built to imply a curiosity and desire to see outside world.

Willing to go upstairs
In Huizhou residential houses, there are not insulating roofs. The second floor is cold in winter and hot in summer, which is very uncomfortable. Respecting the elders, they are arranged to live in the first floor. Besides, the first floor is normally a place of banquet and other formal occasions. Children live in the second floor, which will be used as storage when they are independent. In λ house, the second floor is a more comfortable and relaxing space for chatting because of openness and ventilation. Villagers prefer to stay in and chat on the second floor. The λ house sufficiently shows the envisioned secularity.

To look up and exchange greetings
In an increasingly flat urban space, shared space is dogmatized and exists only as a physical state, ignoring the core of people who share and communicate.In such a village, because of pure clan relations, the most original exchange scene can be restored: women walking through the path suddenly hear somebody’s calling her name, following the sound, being delighted to find an upstairs friend.The one on the village road and the other upstairs chat for a while; Then the passer-by continues walking and the other keeps viewing. Originally plain architectural form becomes a breakthrough in the spatial relationship of architectural forms because of this exchange, which is a completely shared exchange.

Postscript
In Chinese, λ implied to cover; this simple and ancient way becomes the only form of action in this small house. The use of material and way of practice are both localized and modern technologies and materials are used in load-bearing reinforcement in some unknown place in order to obtain an invisible modernity. This architecture adopts such a way of " renewing the old architecture with new technology，vest the newly built house with old look" to achieve a delicate reconciliation of the sense of locality and modernity. Nowadays, there is a hot topic that cities shall give economic assistance to rural area while the rural area shall educate the cities in those lost cultures. Due to modernization, cities have lost most of the materialized cultural heritage, which is still reserved in villages that have not been shredded by urbanization. However, it is a pity that, despite of some physical heritage, the original logic, aesthetic and concept of a whole set of thinking and construction have gradually been forgotten. Different from the rationalism and precision of modernism, the traditional art is sensual, retreat, and metaphysical, which enables us to understand the exploration on traditions at different levels, different periods and different depths. To find the way of contemporary Chinese architecture, as the last surviving traditional architecture sample, the countryside should be a center of exploration and study. 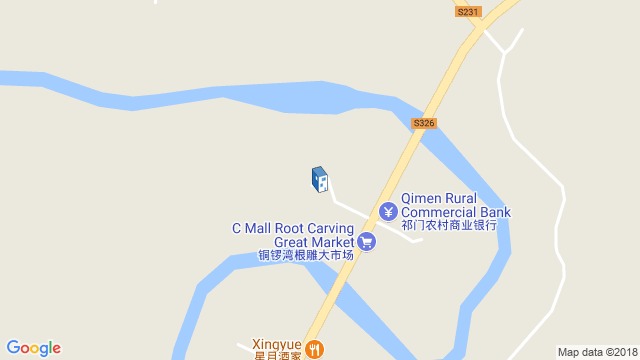 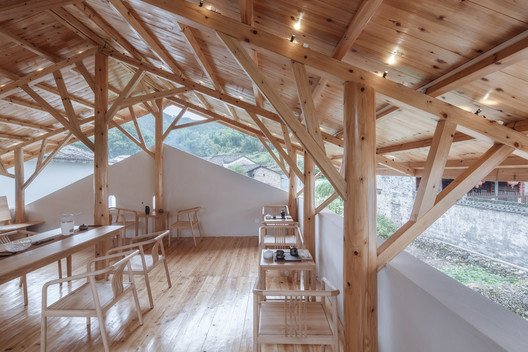