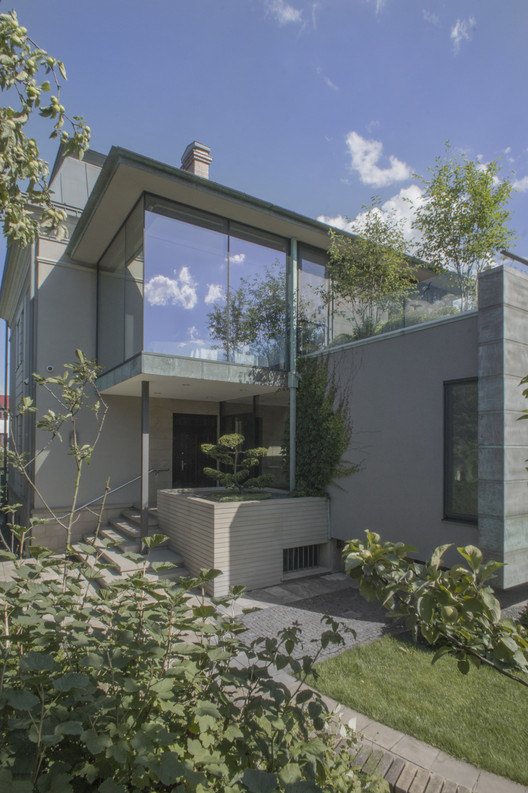 Text description provided by the architects. As the family extended the residents have preferred to enlarge their home rather than moving elsewhere, as they are in love with their neighborhood and the city. Adding the extension in inner courtyard architects divided the house in two separate partitions.

Most of all architects wanted to connect the interior with exterior and the landscape. The house that was previously built by the principles of traditional architecture was to be open to the space and nature. For this main purpose  huge built-in pots for plants and large trees on the first and on the terrace of the second floor were made close to the glass to be totally  connected with the interior

The place of the main element of the design of the exterior took thin elegant steel column at the entrance which supports the second floor and the roof.  Such decision was a significant challenge and risk for engineers and builders, but eventually all agreed that it was worth it.

Also, due to the lack of space on the site and the proximity of neighboring houses, architects had to look for a solution to preserve the privacy of the inhabitants. This element has become the large wall that serves as a barrier to both - the children's bedroom on the ground floor and the dining terrace on the second.

When choosing materials for decoration, architects have preferred only raw and natural materials. So copper that was artificially oldered was the choice. Due to its heterogeneity and coloration close to the natural green, architects decided to sculpt the main major wall and all the elements of the roof and gutters. Heat-treated ash terrace board and a number of metal elements became complementary.

Since the residents had to leave during the reconstruction period, the architects faced the primary task of implementing the project in a few months. So they decided to use thin, lightweight, prefabricated frame for the main construction. It can be mounted quickly and allowed to work in cold weather, witch was very important because of the year period that was during the project.

As most of the reconstruction project affected only part of the building, the preserving of many interior elements and landscape during repairs was also a serious complication in the project. For example, when designing the interior of new spaces, architects faced with finding the solution how to leave and harmoniously enter the facade sandstone on the ground floor and expensive exclusive parquet wood on the second floor.