Save
Tensile Structures: How Do They Work and What Are the Different Types?
Share
Or
Copy

Historically inspired by some of the first man-made shelters—such as the black tents first developed using camel leather by the nomads of the Sahara Desert, Saudi Arabia, and Iran, as well as the structures used by Native American tribes—tensile structures offer a range of positive benefits compared to other structural models.

Tensile structure is the term usually used to refer to the construction of roofs using a membrane held in place on steel cables. Their main characteristics are the way in which they work under stress tensile, their ease of pre-fabrication, their ability to cover large spans, and their malleability. This structural system calls for a small amount of material thanks to the use of thin canvases, which when stretched using steel cables, create surfaces capable of overcoming the forces imposed upon them. 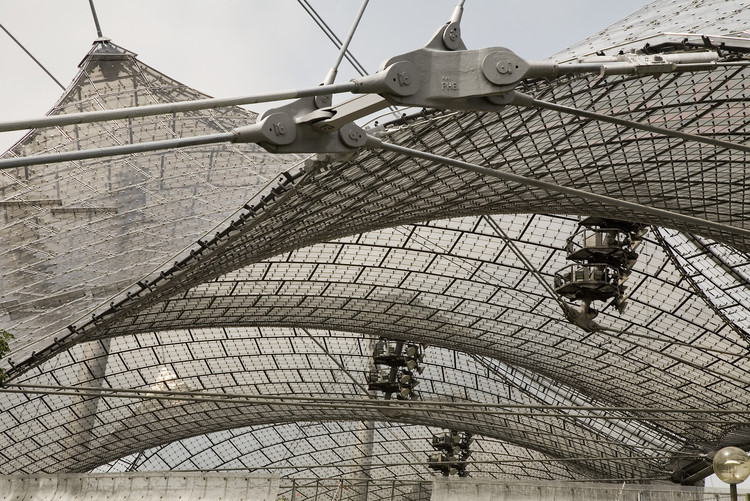 Predominantly used in coverings of sports centers, of arenas, and industrial and agroindustrial constructions, tensile structures are based on the old systems used during the Roman Empire. However, from the Roman period until the mid-20th century, due to the low demand, usability, and lack of manufacturers of cables, canvasses, and connections capable of resisting the forces generated, there were few technological advances. It was only after the Industrial Revolution and the triggering of the era of Fordism that new developments were able to meet the intrinsic needs of this construction system. The low cost of mass production and the demand for systems capable of adapting to the most varied terrains with large spans, such as circus tents for example, encouraged the development of the technique.

The instability caused in previous models by the application of interlaced cables and very light covers, resulting in structural deficiencies, was solved during the middle of the last century. This was done thanks to a system of steel cables and fiber membranes with a high degree of strength, together with layers of waterproof coatings, giving protection against ultraviolet rays, fungus, fire, and allowing greater or less translucency and reflectivity.

Such progress was only possible thanks to the physical-structural studies initiated by German architect and engineer Frei Otto, who since the 1950s conducted the first scientific studies and the first works of roofing using tensioned steel cables combined with membranes.

As a student, Otto visited the office of Fred Severud, where he saw the Raleigh Arena in North Carolina and was impressed by the bold aesthetics and propitious comfort of the project. Back in Germany, he began to explore small-scale physical models, empirically generating several surfaces, by means of chains, pulled cables, and elastic membranes.

Convinced by the usefulness of tensioned roofs, he developed the first large-scale project using the system, which later enabled projects including Olympic stadiums, clubs, zoo, and pavilions. In 1957 he founded the Center for the Development of Light Construction in Berlin. Seven years later, in 1964 he created the Institute of Light Structures in Berlin at the University of Stuttgart, Germany.

Author of notable projects passed by experiments and technical refinement, such as the German Pavilion for the 1967 Expo in Montreal and the Munich Olympic Stadium in 1972, the architect is renowned for his intense research work and was honored with the RIBA Royal Gold Medal in 2006 and the 2015 Pritzker Prize. Frei Otto is still responsible for the first comprehensive book on tensile structures—"Das Hangende Dach" (1958)—and intensified the idea of reinventing material rationality, prefabrication, flexibility and luminosity over internal space, and even sustainability, when the term was not yet used in architecture.

There are three different main classifications in the field of tensile construction systems: membrane tensioned structures, mesh tensioned, and pneumatic structures. The first relates to structures in which a membrane is held by cables, allowing the distribution of the tensile stresses through its own form. The second case corresponds to structures in which a mesh of cables carries the intrinsic forces, transmitting them to separate elements, for example, sheets of glass or wood. In the third case, a protective membrane is supported by means of air pressure.

Structurally, the system is formalized by combining three elements: membranes, rigid structures such as pole and masts, and cables.

The membranes of PVC-coated polyester fibers have greater ease in factory production and installation; lower cost; and medium durability—around 10 years.

PTFE-coated glass fiber membranes have superior durability—around 30 years; and greater resistance to the elements (sun, rain, and winds); however, they require skilled labor.

In this system, there are two types of support: direct and indirect. The direct supports are those in which the construction is arranged directly on the rest of the building structure, while the second case is arranged from a raised point such as a mast.