San Diego Airport has unveiled their permanent interactive artwork DAZZLE on the Airport’s Rental Car Centre commissioned by San Diegos County Regional Airport Authority, that features the debut of E Ink's revolutionary prism technology on a large architectural scale. The installation has been designed to manipulate the form of the façade using inspiration from the World War I military technique “razzle dazzle” that camouflaged the outlines of ships. This phenomenon of visually scrambling the shapes to hide from being spotted can be witnessed in nature too, as the stripes on a zebra equally become an optical illusion to disrupt the predator’s perception. 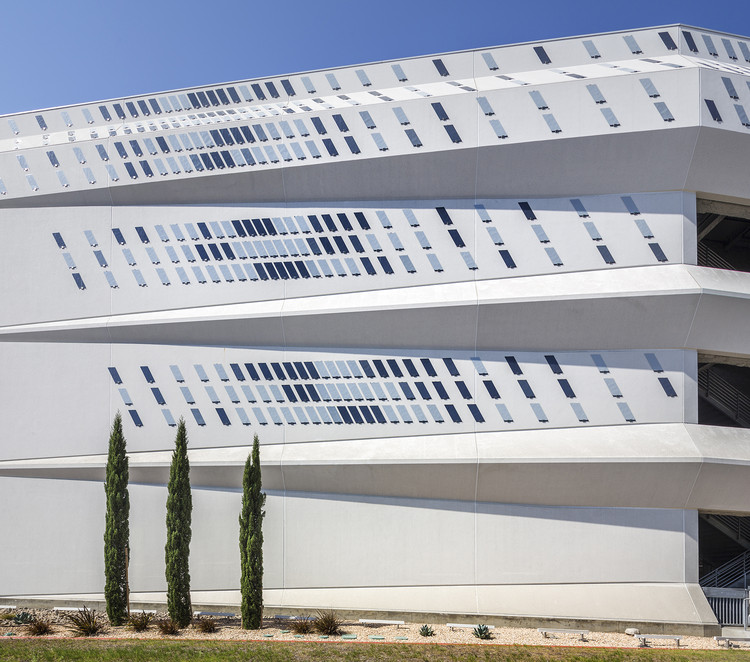 DAZZLE is comprised of 2,100 autonomous E Ink Prism tiles integrated with photovoltaic solar cells to power them wirelessly. The artist team Ueberall International, selected by the Airport Authority, are responsible for a gigantic canvas of e-paper that they can program to display many different patterns across the pixels. Each of the tiles has a unique address, enabling the host computer to map transitions from black to white, evoking water ripples or moving traffic. The information is then transmitted to wireless transmitters facing the building that forward the data to clusters of tiles which is passed along. The e-paper tiles are arranged across the façade in algorithmic distances to each other as each tile is articulated in a parallelogram shape for a dynamic effect even when the pixels are stationary.

E Ink is the world’s leading innovator of electronic paper technology, famously used in eReaders producing a low power, durable display. The artwork will use prism, an E Ink product line has an overall consumption of less than two of the tiles as panel TVs powered by the integrated solar cells. Their prism technology uses pigments to create a similar matte appearance to traditional paper surfaces specifically designed for the architecture and design industry.