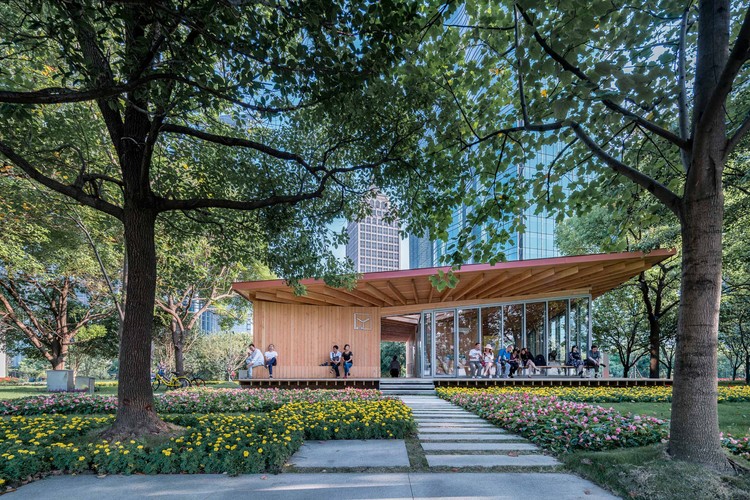 “River Viewing Service Station” is a service station at Lujiazui northern riverside section on the eastern bank of the Project on “Connecting Both Sides of Huangpu River of Shanghai”, providing citizens with rest spaces and public toilets. The station is within a narrow levee-shaped green field defined by riverside running path and inner riding path. It is an extension of the access of an existing underground garage staircase. The site is more than two meters above the city roads with the northern riverside slightly higher than the southern side. In the neighborhood there are many old trees, forming a small forest.

In order to balance an extremely short project schedule of only one month and our unremitting pursuit for quality and space experience and to give consideration to problems such as space constraint and control of garage roof structural weight, we adopted the steel and wood hybrid system mainly composed of laminated wood to make a rapid construction possible. With a high prefabricated rate, the site is basically adopting dry construction, which has little impact on the environment.

Backed by a succession of skyscrapers in Lujiazui and separated by Huangpu River from Old Bund and North Bund, this site is a key public space in central Shanghai. This small station has provided us with opportunities to explore the relationship between architectures and sceneries that have exceeded its own dimension. We hope that this station can intensify its own features while serving the citizens in an easily approachable atmosphere so that the architectures can become a scenery amplifier. The name of “River Viewing Service Station” has highlighted the double appeals of the service station.

The station can be divided into two sections: The eastern part is a relatively closed public toilet while the western section is an L-shaped lounge combined with garage staircase. The northern and western sides facing the Bund are both full-height glazing and rest platforms. On the northern river-viewing platform is provided with benches along the station´s external wall, where visitors can take fitness break. Between these two parts there is a roofed vestibule cutting through the architecture, which connects the riding path in relatively low south with the river-viewing platform in relatively high north. The square planar contour of the station is in sharp contrast to the relatively complicated half-spiral straight line curved surface single-direction purline roofing structure made of copper imitated Al-Mg-Mn Alloy Sheeting.

Viewed from the riverside, the station resembles a large pavilion with far-extending eaves and a lithe crimped roof, which is slightly elevated from the site. The umbrella-shaped radial purlines under the counter-slope eaves in the north have become a visual focus. The purlines converge to form a natural triangular skylight, one half in the lounge and the other half above the vestibule, illuminating the dark roof recesses and strengthening the space depths.

Viewed from the riding path in the south, the station roof is divided into two halves respectively in the east and west, which have different heights but both tilt inward. Especially, the roof at the corner of western-section stair case in the center has been depressed almost to the lowest point of visual horizon and the copper imitated plates roofing has extended to western section´s southern façade. This specially depressed dimension and the continuity between roof and façade have strengthened the entering sense of the side back to the river, guiding visitors from the central vestibule to the river scene.

Ascending step by step from the riding path through the narrow and low-rise vestibule, the roof will gradually rise with your body movement, the dense tree crowns originally at the end of the vestibule will also raise in your field of vision, breaking through the high and spacious eaves in the north. Standing on the open and clear river-viewing platform and viewing through the trunks at the bottom, you can see the glistening river surface is stretching horizontally, constituting a flowing scene with figures walking or running along the riverside.

The benches on both sides of the vestibule will attract people to sit idly and appreciate the river scene leisurely. At this moment, you can only see the glistening river surface and feel a special tranquility when the city at the other side of the river is concealed by the trees. Of course, when you descend from the platform and zigzag down the stepping stones in the forest, you will access the running path and waterborne platform, where you can enjoy a panoramic view of the magnificent city skylines across both sides of Huangpu River. 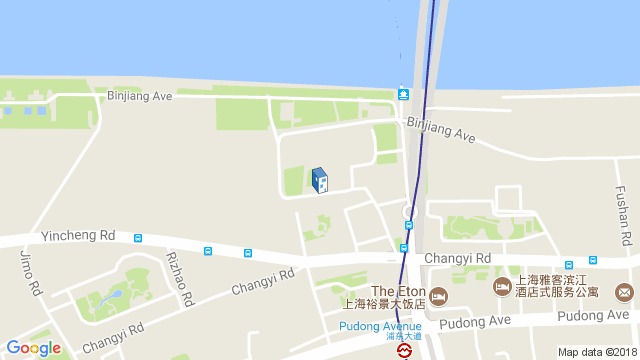 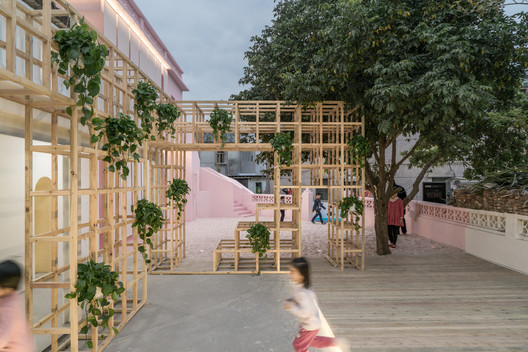 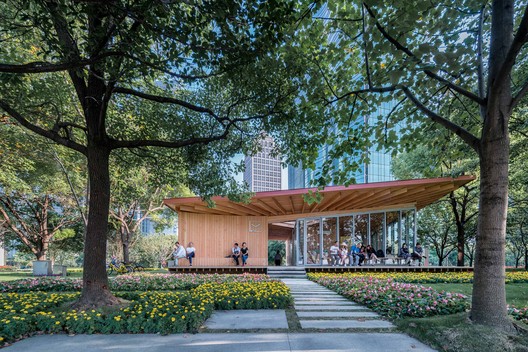