The Beverly Willis Architecture Foundation launched a website called “Pioneering Women of American Architecture.” The website seeks to promote and document important women in architecture. It is the end result of numerous house conducting interviews, collecting research and photo documentation, as well as fact-checking. Since 2012, Beverly Willis and Wanda Bubriski have been working towards bringing to light the complete works of women architects in America.

A jury of architectural historians selected the women on the website based on strict criterias. Some of the women included on the site are Marion Mahony Griffin, Ada Louise Huxtable, and Ray Kaiser Eames.

According to the website, Reyner Banham called Griffin, “America’s (and perhaps the world’s) first woman architect who needed no apology in a world of men.” Griffin worked alongside Frank Lloyd Wright, spreading the American Prairie School style not only in America but also in Australia and India.

Being a New York Times’ architecture critic, Huxtable had control over others architectural reputations. Her online profile highlights her accomplishments such as being the first women to be a Pritzker Prize jury member, winning a Guggenheim Fellowship, a Pulitzer Prize and more.

The web page discusses Ray Eames’ contribution to everything from architecture to furniture, textiles, film, and toys. It was thanks to Ray’s art background that bold, colorful Mondrianesque panels made their way onto the front façade of the Eames house.

Thanks to BWAF, all these women, and 47 others, are immortalized on the website. The site was designed by Los Angeles-based Yay Brigade and supported by the National Endowment for the Arts and dozens of design firms. BWAF plans to expand the site, adding more women, and hopes that women’s architecture history will encourage more young women to study and practice architecture. 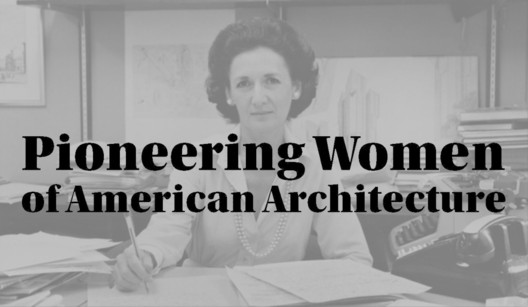