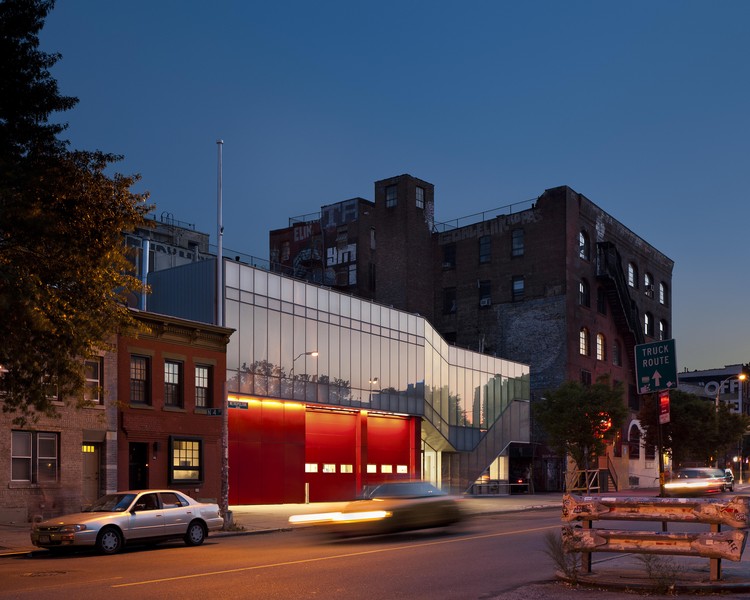 Text description provided by the architects. The two-story, 12,400-square-foot contemporary design accommodates the Fire Department of New York (FDNY) ambulance crews and vehicles and occupies a prominent site on Metropolitan Avenue near Bedford Street in the rapidly developing Williamsburg, Brooklyn neighbourhood. The station is part of FDNY’s plan to improve response time to medical emergencies throughout the city by increasing the number of stations and thereby reducing the distance and time ambulances travel to those in need. The station’s requirements led to a four-part division of the facility.

Since the space for housing vehicles calls for a higher ceiling height than in the rest of station, one side of the station is taller than the other and that change helps organize its functions. On the ground floor to the east is space for four vehicles, a vehicle support zone and personal protective equipment storage, while to the West are the lieutenant’s office and other administrative space. On the second floor, the east side supports locker rooms and bathrooms for the 54 women and 97 men who maintain the station’s three shifts. On the west side are a fitness facility, training room, and 700-square-foot combined kitchen and lounge area.

The first floor’s different ceiling heights repeats at the second floor and the roof line. The architects mark it with a skylight that extends from the front to the back of the building bringing daylight to the second floor and through an opening in the floor to the ground level. The double height glass-enclosed entry also marks the division between functions and is filled with natural light. On the exterior, roll-up FDNY red doors on the vehicle side introduce bright colour for what is otherwise a primarily cool, glass façade.

Providing a diagonal sculptural break is the transparent exit stair, with perforated aluminium sandwiched between two sheets of glass that runs parallel along the street façade, connecting the entrance to the second floor. The 90-foot-long, second-story translucent glass wall, with a honeycomb pattern glass insert, appears to float above the ground floor and is part of the building’s strong identity. Aglow in the evening, the new Greenpoint EMS Station is a distinct presence in the Williamsburg community. 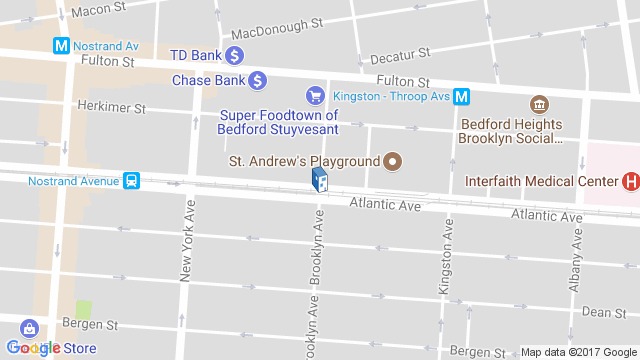 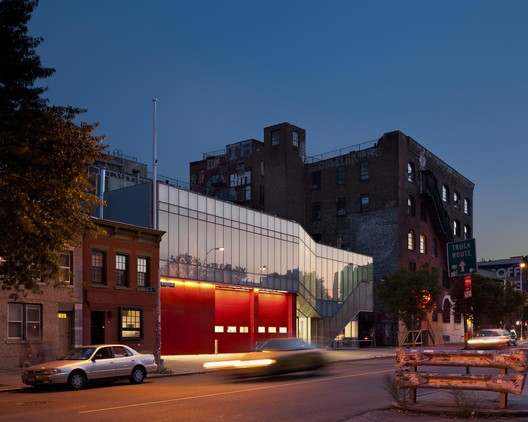