Text description provided by the architects. Recycled wood grid merges internal and external areas in this residence at Alto de Pinheiros neighbourhood. Residence at Alto de Pinheiros uses a structural grid of reclined wood as an integrating element of the common areas, respecting the vegetation and the existing trees on the site. Perkins+Will has been hired by a family from São Paulo to build its new residence, located at Alto de Pinheiros; a traditional and predominantly residential district of São Paulo. The site, with approximately 1,000 square meters, has been acquired by customers due to its natural characteristics; about 50% of it was occupied by a generous garden, including an imposing Flamboyant. Therefore, respect for the existing conditions on the site would become the great challenge in this project.

The first initiative was to understand the characteristics present, rather than any definition of a party. It has been decided to claim the Flamboyant as the main character, making all other solutions were thought and modelled according to their characteristics. Located on the eastern corner of the terrain, the Flamboyant has been digitally scanned, including its branches, thus being able to set constructive guidelines without threatening your well-being.

Once defined the protagonist, it should be visible by all; according to this principle, the living/dining room and gourmet balcony (common and reception areas) should be closely linked to it. These areas were covered by a structural wooden grid (developed together with the structural engineer Hélio Olga) that intertwines them and connects the garden from the bottom of the terrain to the street, which is the most striking architectural element. The design of this structure was only possible thanks to the three-dimensional mapping of the beginning of the process, therefore the dimensions and heights of the grid were defined to reduce the impact to the maximum the landscape.

Other aspects of the residence include:

The program requested for this residence includes: 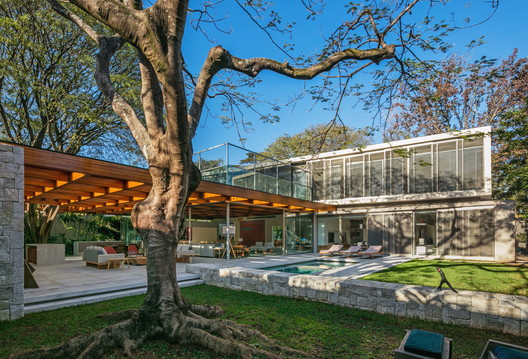