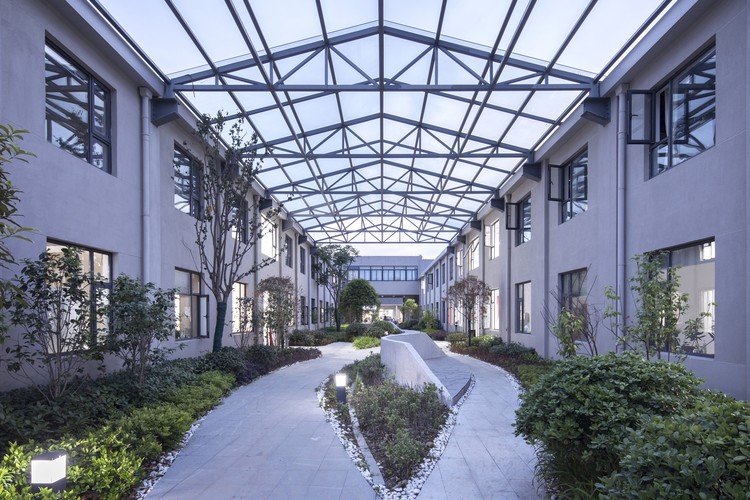 Text description provided by the architects. Moling 9 Workshop, transformed from Niu Shou Industrial Park that was built in the 1990s, is located in Jiangning District, Nanjing City.

After this transformation, it becomes a Creative Park of Culture and Science with "Internet +" as its core and with a total of nearly 40,000 square meters. The base is rectangular in the east-west direction, and the short side at the western end is the only part that interfaces with external roads.

With regard to the shape of the base and the order of its development, the western end of the block serves as a start-up area, consisting of two U-shaped buildings and temporary houses scattered on the street.

Designers persuaded its proprietor to abandon the initial blueprint of constructing the park’s identity through large-scale renovation of the facades of the two factory buildings along the street. Instead, they suggested to set up an open transitional zone between the closed park and the city where the park and the city can interact with each other through rearranging the venue between the factory buildings and the outside world with the transformation of the space instead of facade renovation, in order to change the previous senses of alienation and unpleasantness of the most Industrial Park to the city, and thus create identity of 9 workshop identity.

In the process of site arrangement, the temporary houses along the street will be demolished while retaining the little houses with a relatively complete and brick-concrete structure in the northwest corner. And based on the dimensions of these houses, we would plant in the vacated ground 4 “industrial huts” made up of steel frames, weathering steel, steel mesh, glass and steel scaffolding.

The "industrial community" consisting of five huts replaced the construction of fences and gates, representing the openness of the park. The space inside these huts make things easy during rush hour for a large number of pedestrians are completely separated from the traffic when entering and leaving the park. Because of the materials applied for the new huts will not only block the view of the park from the outside but will create an overlap of sight with the old factory, creating a mixing effect of old and new buildings.

We hope that the five huts in this open space will serve as a catalyst space with uncertain functions in the early stage where we envision people in and out of the park can wait, meet up and chat pleasantly leaning against the edge of scaffolding, and even bask in the sun and read books. In the later stage, because of the business needs, the huts along the street can be transformed into florist, coffee shop, bookstore and so on with commercial functions, so that the park will be provided with more diversified functions and greater urbanity.

In the transformation of the two U-shaped factory buildings, on the basis of retaining the style of the original buildings, the inter-building space will be added the space of intercalated office taking advantage of building height, while the central open space of each U-shaped building was transformed into a green-filled courtyard. The new truss and glass roof, covering part of the courtyard, creates an ambiguous zone between the indoor and the outdoor. The zone is expected to extend the human activities as far as possible to the courtyard in addition to connecting the two sides of buildings.

Two U-shaped factory buildings will be transformed along the interface of the park central road. We have chosen the way that could erase the most traces of transformation. In this interface, we added another layer of structure, which does not only create external space for placing the outside machine of refrigeration equipment but also highlights the entrance to the building. At the same time, the bridging piece applies for inclined plate design at the bottom, reducing the light distraction indoor. This layer of additional structures, come in tune with the original style of the factory buildings, entering finely into the integration of the original building as much as possible. 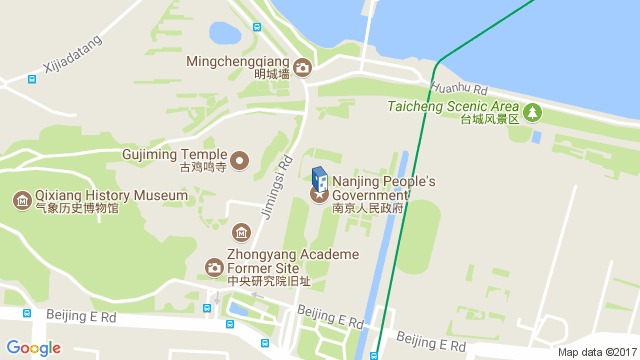 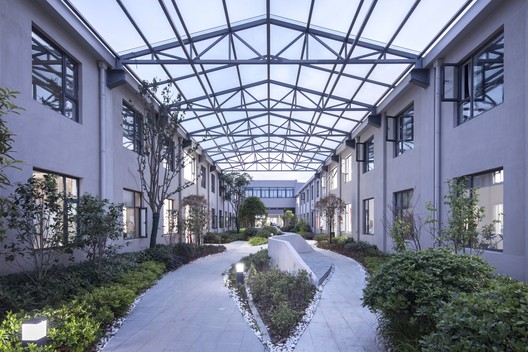