Save
BIG Reveals Plans for Massive Rodeo and Entertainment District in Austin, Texas
Share
Or
Copy

BIG has revealed plans for a new sports and entertainment district in Austin, Texas, that will bring soccer, rodeo, music, shopping, dining and hospitality under one roof. Called the East Austin District, the 1.3 million-square-foot complex will be located on the site of the existing Rodeo Austin, offering a new entertainment experience for the city’s booming population. 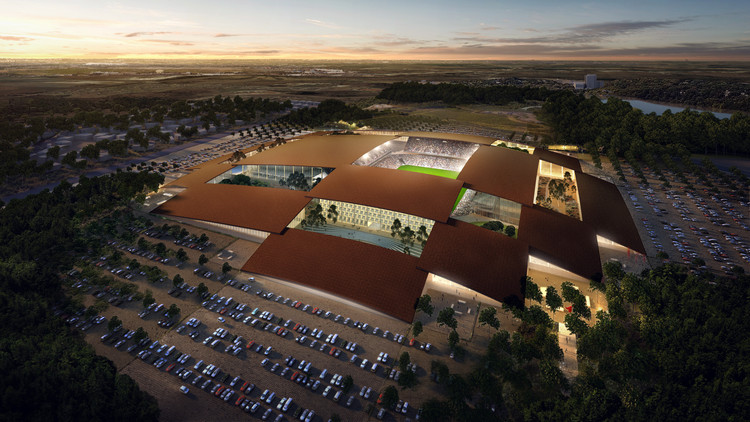 The design of the East Austin District is inspired by the Jefferson Grid, the plan devised through the Land Ordinance of 1785 by President Thomas Jefferson to divide the newly purchased lands of the western United States into square-mile sections. In the East Austin District, this manifests as a roofscape that links the complex’s various structures into one checkerboard of open and enclosed spaces. More than just a concept, the large roof surface will be clad in red photovoltaic panels, allowing the district to be completely self-sufficient.

The centerpiece of the District will be the two multi-purpose state-of-the-art sports venues. The larger of the two, a 40,000-seat open-air stadium, will host soccer and rugby matches, as well as music festivals and other major events; the second, 15,000-seat arena will serve as the home of Rodeo Austin, and will support additional music events as well as basketball, hockey and other indoor sports.

The stadium and arena will share 190,000 square feet of support facilities, optimizing efficiency and cost. Both will feature all-wooden interiors inspired by the local “barn and porch” vernacular, where outdoor spaces are often as essential to a home as its indoor spaces. This concept continues throughout the District, where the eight courtyards separating the enclosed pavilions will provide outdoor ‘living rooms’ for the public.

In addition to recreational, shopping, dining and hospitality areas, the District will also contain 28,000 square feet of youth facilities where local businesses will be able to partner with schools and community programs. 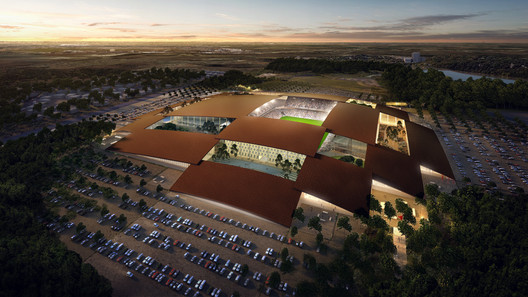