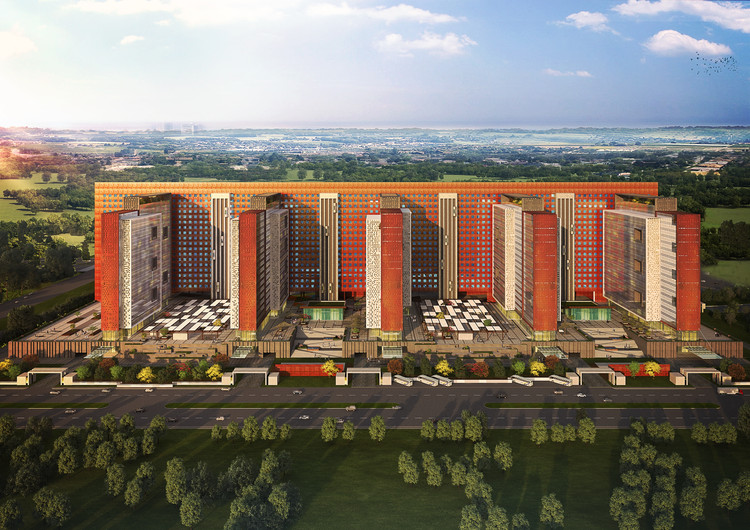 Perhaps the largest challenge with a design of this size is how to navigate the large volume of people which would inhabit it. Morphogenesis approached this by designating the ground plane for vehicular movement and podium levels exclusively pedestrian circulation. On this podium level, transportation routes are optimized to create no walking time greater than 4 minutes from an entrance to office module—a design strategy similar to that of airport terminals.

The Surat Diamond Office wanted to foster an environment of social interaction and recreation. A central spine connecting all offices is designed to act as an interactive hub comprising of break-out spaces, green atriums, and visual experiences. Additionally, courts exist on the eastern side house food courts and other recreational areas to function as incubators for new businesses and create a sense “bazaarculture” within the office complex.

Landscape, security and traffic management come together to foster a seamless movement of users. The transition between these pedestrian levels and the office environments is made harmoniously through the use of microclimate. Exploring the potential of adaptive comfort and creating a controlled microclimate helped realize the possibility of using natural ventilation and (protected) open spaces for interactive functions of the program. Over 40% of the building spaces are naturally ventilated, and a dense vegetation fills both the outside and inside of the building. These decisions not only blur the line between interior and exterior but also creating psychological advantages and improving indoor air quality.

Additional climate-responsive design techniques are utilized to combat the hot and humid climate of Surat. All offices have been designed to face a pure north-south orientation, and a robust building envelope with less than 30% window area, lightweight concrete block construction and using the advantages of thermal mass by natural brick cladding helps bring down the external heat gains. Other design strategies such as solar control, wind/air movement, and thermal massing are employed to help to achieve cooling loads as low as 1.0W/square feet. The building is also designed to IGBC Platinum standards, features rainwater harvesting, photovoltaic power generation, a gray water system, as well as local construction materials.

The efficiency of the building also extends into its construction design. The project represents an innovative approach to low-cost architecture designed with maximum spatial efficiency. Design optimization and simplicity through design modularity diminished project costs to as low as $50/sq ft while still maintaining high standards of environmental sustainability.

The Surat Diamond Bourse is conceived as an exemplar for integrating high-density commercial architecture with an efficient climate-responsive design. Although its massive footprint, the building was carefully designed and considered to reduce its environmental impact while simultaneously creating a nurturing, comfortable environment for its workers. This morphogenesis masterpiece is setting new benchmarks for global developments of this scale. 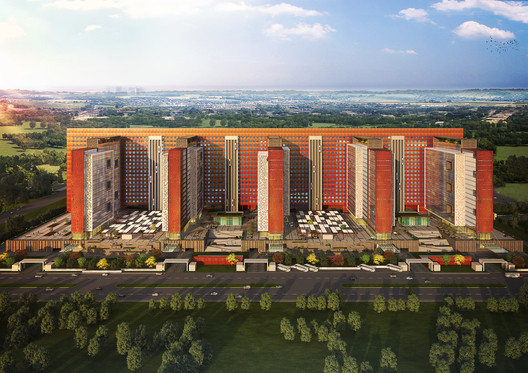