In their latest issue, Rolling Stone has named Elon Musk "The Architect of Tomorrow," as well as listed architects David Benjamin and Kate Orff as two of their "25 People Shaping the Future in Tech, Science, Medicine, Activism and More."

Gracing the magazine's cover, Elon Musk is the subject of the magazine's in-depth profile, covering his latest ventures ranging from the new Tesla Semi trucks to SpaceX to his tunnel drilling operation, the Boring Company.

"He's probably the only person who has started four billion-dollar companies – PayPal, Tesla, SpaceX and Solar City," Rolling Stone describes Musk. "But at his core, Elon Musk is not a businessman or entrepreneur. He's an engineer, inventor and, as he puts it, "technologist." And as a naturally gifted engineer, he's able to find the design inefficiencies, flaws and complete oversights in the tools that power our civilization."

The magazine also selected two boundary-pushing architects to their list of 25 innovators: David Benjamin of The Living and SCAPE studio founder Kate Orff.

Known for his firm's installation at the 2014 MoMA PS1 Young Architects Program, Hy-Fi, Benjamin was selected to the list for his research into renewable building materials that can be grown, reducing the environmental impact of buildings. For Hy-Fi, The Living produced a 40-foot-tower constructed from bricks grown from mushroom root. Other recent projects have included a collaboration with Airbus to create lightweight parts for their airplanes and a proposal to attach sensors to living mussels in New York's East River that will alert passersby to the quality of the water.

Founder of SCAPE Studio and recent MacArthur "Genius" Grantee Kate Orff is also known for her work with New York City's aquatic life. Harnessing the water filtration and wave-breaking abilities of oysters, Orff designed a network of oyster-habitat-supportive net systems that will be introduced throughout the New York harbor as a key part of the city's Living Breakwaters project. Scheduled to begin in 2018, the project was also the subject of a recent episode of the design podcast 99% Invisible.

Read more about these architects and see the full list of "25 People Shaping the Future," here. 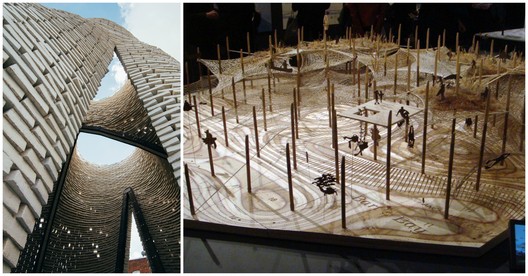