At last night’s keynote address, Tesla unveiled the company’s first electric-powered large cargo vehicle, the Tesla Semi, providing a first look at how the shipping industry of the future could operate.

Employing the same sleek forms that define their roadster and sedan models, the Tesla Semi is designed “specifically around the driver,” with ergonomically-designed stairs for easier entry and exit, full standing height interior, and a centrally-position driver’s seat for optimal visibility. Touchscreen displays will provide the driver with heads-up navigation and data monitoring, while a blind spot protection will increase driver awareness on the road. 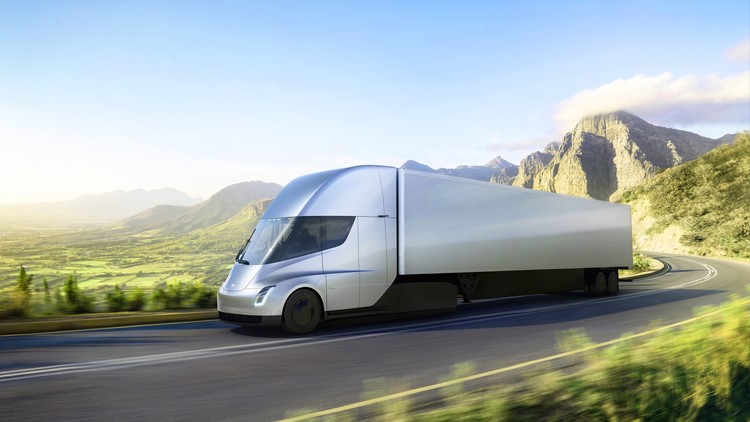 The Semi was also lauded as “the safest truck ever,” thanks to features such as Automatic Emergency Braking, Automatic Lane Keeping, Lane Departure Warning, event recording, and Tesla’s “Enhanced Autopilot” system.

"It's not like any truck that you've ever driven,” said Tesla CEO Elon Musk at the Los Angeles event.

The truck will be able to go from 0 to 60 mph in 20 second when at full legal capacity of 80,000 pounds, and will be able to travel approximately 620 miles (1,000 kilometers) on a single charge. And when hooked up to the newly revealed Megacharger (which could be installed along popular travel routes), the battery will be able to add about 400 miles in just 30 minutes.

While these travel distances don’t quite measure up to a more traditional diesel-powered truck, Tesla notes that a majority of shipping routes will still be able to be made on a single charge, given that 80% of freight in the U.S. is moved less than 250 miles.

Price, too, may be a hindrance to full adoption of the Tesla Semi. According to a Carnegie Mellon study, the Semi’s battery pack alone is estimated to cost about $200,000, nearly $80,000 more than the cost of the average diesel truck. But Tesla is banking that companies will consider the long-term return on investment of the electric-powered vehicle. According to the company, based on current electricity and fuel prices, owners can expect to save $200,000 or more over a million miles.

Production of the Tesla Semi is set to begin in 2019. Several companies, including Walmart and shipping giant JB Hunt, have already announced plans to preorder a number of the trucks.