The Visitor's Center at Apple's new Cupertino campus has opened to the public. As the public face of a vast complex designed by Foster + Partners, the independent building is "a uniquely designed architectural extension" of the company's new headquarters. "With similar aesthetics in staircases, stone walls, and terrazzo floors," the center’s "cantilevered carbon fiber roof appears to float," supported only "by stone clad cores and no other extraneous columns for support." 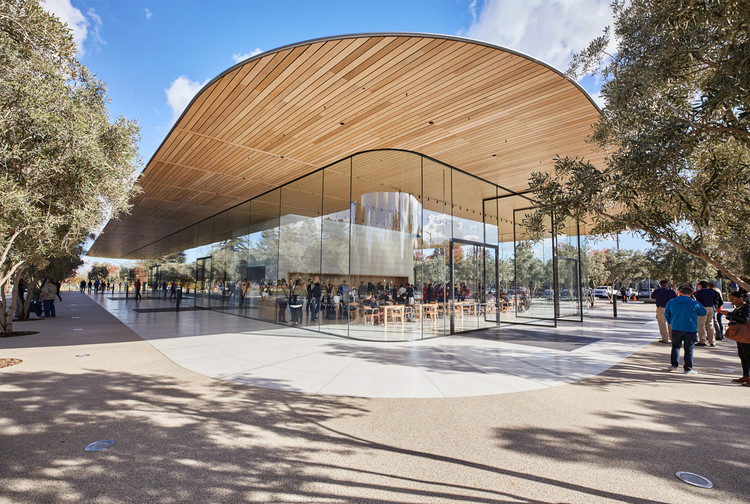 Guests are also welcome to make their way upstairs to the roof terrace for beautiful views of the main building and some of the 9,000 native and drought resistant trees on the grounds. As they return to the first floor they are invited to visit the cafe surrounded by olive trees or the store with Apple’s full range of products and exclusive Apple and Apple Park branded merchandise.

According to Apple, the purpose of building is to invite "guests to explore Apple Park in an immersive and engaging way." A three-dimensional model of the campus is "brought to life by augmented reality technology" – here, visitors are able to learn about the project, it's function, and the company which commissioned it. "Visitors can also choose to lift the entire roof off the building to peek inside to the collaborative office pod layout," they added.

On a day of big reveals for Apple - including a demonstration of the architect-friendly ARKit augmented reality technology - perhaps none was presented so glamorously as the debut of the spectacular venue in which the event was held: the brand new Steve Jobs Theater. 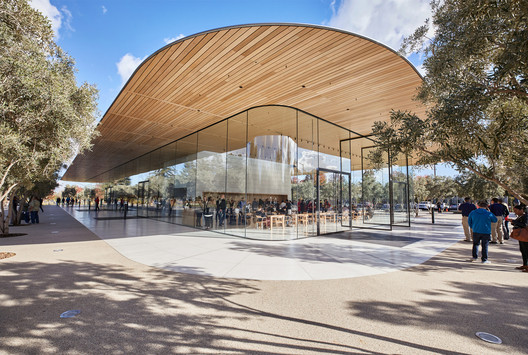