Bold, innovative and set to become the largest botanic garden in the world, images of Oman’s future light-filled oasis in the desert have been revealed. A collaboration between Arup, Grimshaw, and Haley Sharpe Design delivers the architecture, engineering, landscaping, and interpretive design in a scheme of over 420 hectares for the Oman Botanic Garden.

The gardens, with guidance offered by His Majesty Sultan Qaboos bin Said Al Said will celebrate the country’s botanic diversity in the foothills of the Al Hajar Mountains. Here, an ancient seabed is still visible after it was elevated to 100m above sea level by tectonic activity.

The scheme uses the diverse landscape to its advantage, working within the undulating land and natural ridges and ravines to generate walkways and inform building elements.

Central to the site, eight defined habitats reflect the habitats of the country, featuring a range of endangered, native and endemic flora. Two sensitive habitats are enclosed by large biomes – shimmering glass structures woven seamlessly into the rolling plains of the desert. The Northern Biome recreates the varied environments of the Northern Mountains while the Southern Biome will house habitats of the Dhofar region, including an immersive green forest ‘Khareef’ setting. The habitats will be supported by a visitors center and education and research facilities and connected by a cable car.

The organic forms of the biomes were driven by the atmospheric conditions of the site, working with the topography and using the sun orientation and weather patterns to optimize natural lighting and cooling and the most efficient plant irrigation. All the water for the site is sourced sustainably with no wastage, contributing to the scheme’s plan for achieving the globally recognized sustainable standard - LEED Platinum.

Keith Brewis, a partner at Grimshaw has said of the design;

“The Oman Botanic Garden is an astonishing project with many layers of interwoven cultural and environmental significance. Its scale and diversity is truly world-leading, and we are honoured to work as the architects for a project that has the conservation of bio-diversity as a core design driver.”

The Oman Botanic Garden will allow visitors to experience the flora of the Sultanate of Oman in only a few hours, and no doubt become a much-loved attraction for locals and tourists alike.

Construction on site is expected to start imminently.

Allies and Morrison to Masterplan New City District in Oman

The competition to masterplan Muscat, Oman's new district, Al-Irfan, is over. Organized by the Royal Institute of British Architects (RIBA), five teams were chosen to submit proposals for the development project. Of those five, international firm Allies and Morrison has been selected to oversee the design process.

Grimshaw Architects, in collaboration with Arup, have revealed renderings for their proposed 25,000 square metre High Speed Two (HS2) railway terminal at Euston Station, in north London. They have developed an "incremental staged design" that will allow for the construction of the new high speed station while maintaining all existing services. 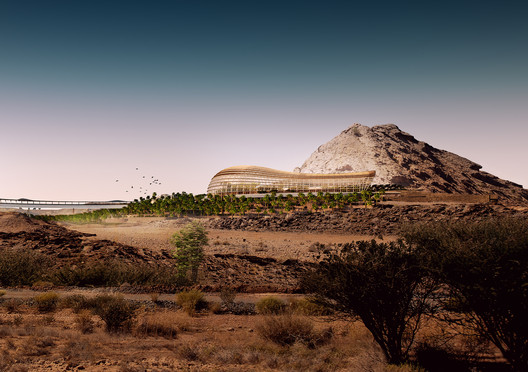