In a hilarious TED talk by world-famous blogger Tim Urban, the procrastinating brain is explained using three squiggly characters: Rational Decision Maker, Instant Gratification Monkey, and Panic Monster. For most of us who procrastinate without fail, the Monkey dominates while the Decision Maker suffers. Panic Monster enters the moment a deadline looms dangerously close—and that’s when all the actual work is done, amid much grumbling, self-loathing and lofty promises of never procrastinating again. But of course, we fail to keep our promises and the wheel keeps turning!

While the internet is full of lists and guides on how to stop procrastinating, for quite a lot of people, those somehow just don’t help at all. And while deadlines, as Urban points out, work for some in terms of getting the work done sooner or later, “long-term procrastination” affects those who must set their own deadlines—think business owners, PhD students, or freelancers. So, how do you get yourself to stop? You don’t! What you need to master is John Perry’s concept of “structured procrastination”—the same concept that Piers Steel earlier explained as “productive procrastination.” Read on for some advice gleaned from pro-procrastination literature.

1. A Is for Acceptance

Most “self-improvement” guides start with this big word, don’t they? Simply begin by accepting that it’s never about not having enough time, or about other people and things distracting you, it’s about your own habit of putting things off until later. But instead of identifying it as some moral dilemma, hellish curse, or brain disease, tell yourself that it is anything but. Let’s not forget that some of the most famous people in history were chronic procrastinators—that's not to say that procrastination is some telltale mark of genius, just that it’s something quite human!

Making lists is, in itself, one the guilty pleasures that procrastinators indulge in to feel good about themselves. And if you’re reading this, chances are that you’re probably already a pro at making lists (and not following them). That usually happens when you begin and end with urgent, daunting tasks only. The key is to mix the Tasks-That-Must-Not-Be-Named with those that are less urgent and equally important, but also easier, quicker or more fun to accomplish.

3. Break That One, Fat, Giant Task Into Smaller Ones

More often than not, a big task is made up of numerous smaller ones, and sometimes, all of these require varying amounts of time and energy. For instance, a task like making a scaled model of the latest project you’re working on can be broken down into sub-tasks like “prepare files for laser cutting,” “arrange and assemble,” and “add final touches.”

Not only would you accomplish things bit by bit, but you’d also be able to tick lots of things off quickly—hello instant gratification! And not to forget, the longer your list, the more “choices” you’ve got in terms of what to tackle first.

Similar to breaking down a task is what Urban refers to as “un-ickying the task”—that is, making sure that any tasks listed aren’t “vague and murky.” Take for example the task “site-hunting for thesis”: how would you go site hunting if you don’t even know what you’re looking for, haven’t already done some research, identified your requirements, and shortlisted some possible options? Driving aimlessly all over the city is not an option, and neither is flying over Google maps!

Who says preparing meals, calling your family, or meeting friends has to be ignored when you have work to do? According to Dr. Perry, canceling on social commitments is actually detrimental for a procrastinator because that’s when the list becomes smaller, stress builds up, and nothing acts as a “breather” during the day. Apart from being the usual procrastinator and not accomplishing tasks you were supposed to accomplish, you also end up not meeting people you were supposed to have been otherwise meeting, so it’s a lose-lose situation.

Similarly, you should keep everyday errands as part of your list of things to do—spending half an hour walking your dog, meditating, organizing your cupboard, or cleaning might just act as de-stressors instead of the opposite.

6. Listen to Your Brain

Listen to your brain when it says it’s bored, or exhausted. Maybe you’d want to move on to another more interesting task, or just take a quick break. But while it’s better to tackle the stuff you find fun or interesting when you feel like it, it obviously doesn’t mean that you flit from one to the other without completing anything. Once you start something, just make sure you finish it.

And what if you end up checking off all the relatively exciting things first and are left with actual work? Well, so be it. You had to get down to it sooner or later. Just remember, as long as you stick to the list, you're safe!

For more on the peculiar phenomenon of procrastination, read Adam Grant’s advice for “pre-crastinators” and how it actually helps creativity, or Dr. Perry’s book titled The Art of Procrastination: A Guide to Effective Dawdling, Lollygagging and Postponing. For those who still feel that purging themselves of the procrastination monster is the only key to success, check out our previous article on the topic:

Scrolling through memes of cats in disguise. Checking if food has magically appeared in your refrigerator every ten minutes. Obsessively arranging books on your shelf by color. Renaming your computer's folders. In short, we seem to thrive on any irrelevant activity to avoid starting a reading, essay, model, or project.

Images for this article were kindly provided by Andrea Vasquez.

NewsArticlesWorkDesignArchitectureProcrastinationJohn PerryTim Urban
Cite: Zoya Gul Hasan. "How to Use “Structured Procrastination” to Get the Best Out of Your Bad Habits" 13 Nov 2017. ArchDaily. Accessed . <https://www.archdaily.com/883297/how-to-use-structured-procrastination-to-get-the-best-out-of-your-bad-habits> ISSN 0719-8884
Save 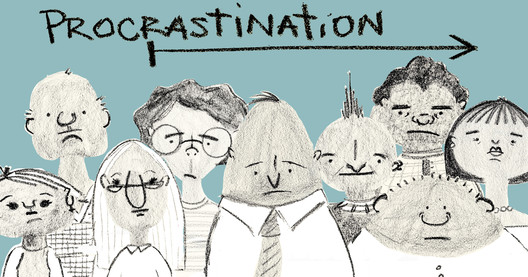