MVRDV and the Tianjin Urban Planning and Design Institute’s spectacular Tianjin Binhai Library has opened to the public in Tianjin, China, and is already offering up some spectacular images across the social-mediasphere.

Located within the new Binhai Cultural District, the library provides storage for as many as 1.2 million books on sweeping, terraced bookshelves in the building’s central atrium. At the center of the room, an enormous mirrored sphere houses an auditorium and reflects the miles of bookshelves around it, creating a dazzling atmosphere for reading and studying.

Check out some first looks at the interior from social media below, and be on the lookout for professional photos later this week.

An MVRDV-Designed Library Tops Out in Tianjin

An MVRDV-designed library in Tianjin has topped out as part of the city's Binhai Cultural Centre. The 34,200 square meter (370,000 square foot) building will join four other cultural institutions designed by Bernard Tschumi Architects, Bing Thom Architects, HH Design, and GMP - creating "cultural corridors" - that are part of a GMP-designed masterplan. 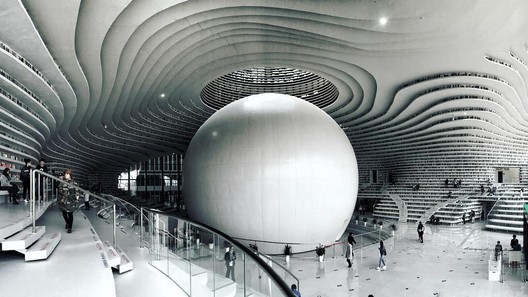