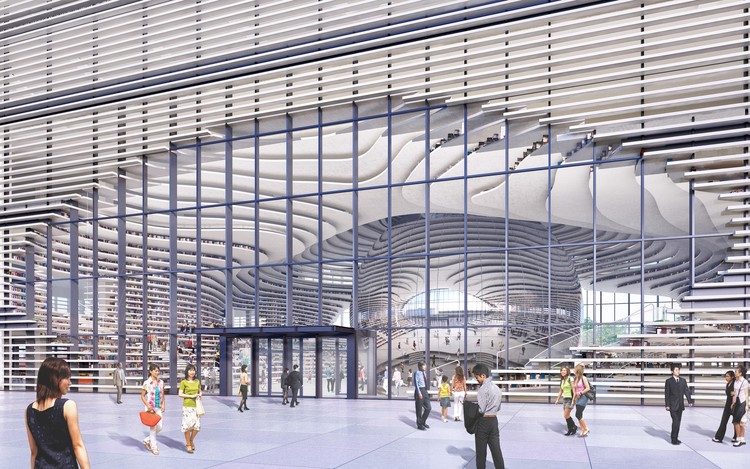 The library’s rectilinear outer envelope gives way to a topographic interior atrium that is centered by a spherical, mirrored auditorium. MVRDV compares the effect to a giant “eye” granting panoramic views of the building’s interior. The sphere is surrounded by terraced bookshelves that also double as seating and extend around the building’s exterior in the form of horizontal louvers. As the library’s exterior volume was stipulated in the site masterplan, MVRDV calls the “eye” an “inverted icon” or “central point and folly for the building.”

“The Eye is the centre of the library. It ‘hollows out’ the building and creates, out of bookshelves, an environment to sit, to read, to hang out, to climb and to access, to create an organic social space,” says MVRDV co-founder Winy Maas. “In its heart is the auditorium which mirrors the environment, giving a 360 degree panorama of the space inside; a truly reflective and pensive environment.”

Outside of functioning as a typical library, the building is meant to be both an education center and a connector from the adjacent parkland into the cultural district. As part of the 120,000 square meter (1.3 million square foot) masterplan by GMP, the complex is intended to be a junction for Tianjin’s CBD, old town, residential districts, commercial areas, and the government quarter.

The library, MVRDV’s second project in Tianjin after TEDA Urban Fabric (completed in 2009), is anticipated to open in mid-2017. 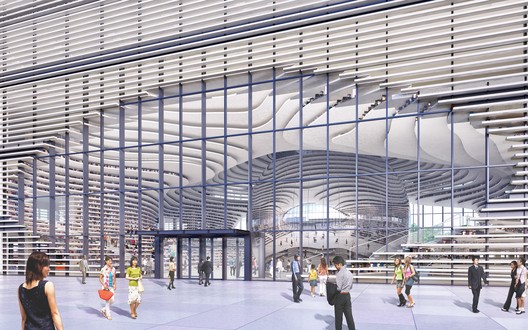