In early September, after opponents of the project, including the City Club of New York, developer Douglas Durst and environmental activists, had successfully mired the project in a legal battle, the project’s primary backer Barry Diller decided to pull the plug. But now, in an agreement brokered by the governor, the project will be allowed to move forward in exchange for a promise to complete the 4.5-mile-long Hudson River Park – a project which began in 1998 with an intended completion date of 2003.

Today, only 70 percent of the park has been built, and the managing group, the Hudson River Park Trust, has struggled to find the funding necessary for both new construction and maintenance of what has been completed. The cost to finish the project had been estimated to cost nearly $200 million, but state officials have not yet stated how much funding will be allocated.

The Pier 55 project had previously come under fire for rising cost estimates and for potential threat to the river ecosystem.

Mr. Diller said in a statement, “I’m going to make one last attempt to revive plans to build the park, so that the intended beneficiaries of our endeavor can fall in love with Pier 55 in the way all of us have.”

See past coverage here, or read the full story here. 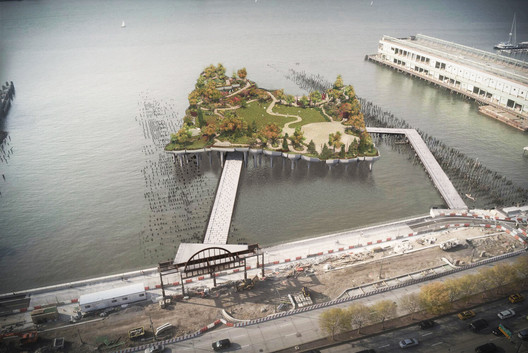