Hoping to answer the question "what does the future city look like?" at Dutch Design Week, MVRDV (definitive design and construction drawings) and think tank The Why Factory (Research and concept design) have fabricated a multicolored, tetris-like hotel in Eindhoven. The future brings decreasing resources, increasing population, and climate change, reasons MVRDV, and with these limitations in mind, they believe futuristic architecture needs one important quality: flexibility. 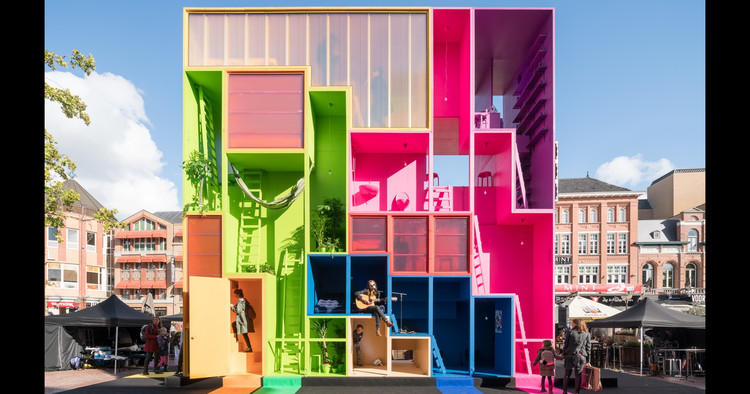 Dutch Design Week challenged designers to shift their mindset to create futuristic hypotheses where architecture and science intersect. Designers were asked, how can architecture facilitate a quickly changing, and at times deteriorating, world?

“Through gaming and other tools, (W)ego explores participatory design processes to model the competing desires and egos of each resident in the fairest possible way,” said co-founder of MVRDV and Dutch Design Week ambassador Winy Maas.

The physical manifestation of (W)ego at Dutch Design Week shows nine urban dwellings in one possible configuration. Each unit has its own personality for the user that occupies it: an orange door to ascension, a lime green space with hammock and ladders, tropical pink that extends up a few floors, a lemon yellow privatized penthouse, and a blue cave—but the possibilities posed by the concept are endless. During its time on display, (W)ego plays a film in one of its nine rooms which details the extent of its potential configurations.

As one enters (W)ego they have to come to terms with others' spatial needs while deciding their own spatial desires. Ultimately, (W)ego begs the question: what is going on next door?

(W)ego will be on display at Dutch Design Week 2017 through October 29th. 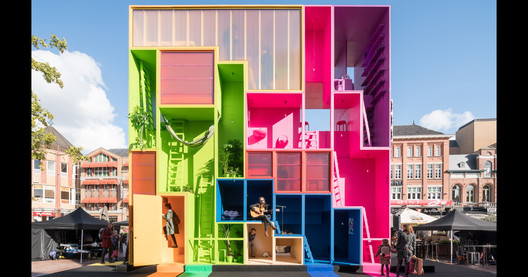