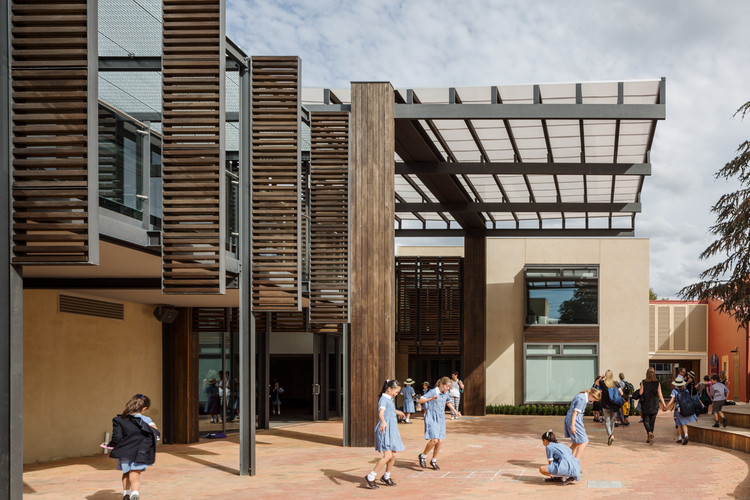 Text description provided by the architects. The redevelopment of the Junior School campus at Ruyton Girls’ School into a powerful three-level learning hub is the latest in a series of dynamic school projects by Melbourne practice Sally Draper Architects in association with DP Toscano Architects.

The firm specialises in tailoring designs to embody the culture of each client, and this has resulted in awards for excellence and environmental sustainability. In Ruyton’s case, the challenge was to integrate two dark and disparate buildings from different eras into a light, warm unified space where a love of learning, curiosity and creativity could be fostered and embraced.

Students at Ruyton, in Melbourne’s inner-east suburb of Kew, are encouraged to dream big and take bold action to fulfil their potential, both academically and with civic and environmental engagement and global citizenship. Within this framework and a tight budget, SDA’s job was to translate the philosophy into a building for Prep to Year 6 that would facilitate the students to excel happily in an enquiry-based and project-based environment.

For SDA, this meant the emphasis had to be on the education process first, augmented by architecture that would be elegant and understated rather than making a loud statement.

While the reimagined junior school was officially opened on May 24 2017, the students – who moved into the new learning space at the beginning of Term 1 – have firm impressions:

“I like that its more communal, with lots of open space and you get to know the whole year level, not just your own class” Lauren – grade 6

“I love that there are no doors to get to the other class. It’s also calm and relaxing” Francesca - grade 2

“I like that the rooms have lots of windows, giving us beautiful views of the gardens outside,” Sophie Year 3.

Sally Draper, and the practice’s associate director Shahab Kasmai, workshopped the project extensively with the Ruyton Principal, Linda Douglas, Head of Junior School, Nicole Ginnane, and the school’s Business Manager Leanne Smith. The consensus was a spate of elements that would inject life into grim old buildings: light, sunshine, fresh air, a seamless flow from indoors to out; agile, adaptable and flexible learning spaces; a sense of ownership, wellbeing and comfort as part of smaller groups and class levels as well as the bigger school community. It was also important to SDA that the girls felt a sense of being in a home-like environment – a safe and carefree place to encourage adventure and educational challenges.

“The whole idea of school as home rather than an institution is something we’re very interested in, particularly for young students,” Draper says. “We have a gorgeous climate that means we live both inside and outside. But this philosophy has rarely  been translated to schools and there’s no reason why it shouldn’t be.”

The existing buildings comprised a 1960s structure and the Carolyn Anderson building, an adjacent three-level BER structure built in 2011. The only connection was a glass-walled walkway on the top level. This lack of cohesion meant that students and teachers had the inconvenience of leaving one building to reach the other and had significant difficulty in creating a sense of collegiality within the school. The problem was solved by constructing a new linear component connecting the two buildings. This strategy, together with the removal of an intermediate floor to create a double height space resulted in a unified new campus.

The heart of the junior school is now a vast, covered central hub that soars seven metres high and, in doing so, provides a light-filled visual link for the entire campus. It acts as an assembly hall and doubles as a function room and physical education space, among numerous varied uses. A baby grand piano in one corner beckons music classes and performances while a large flat-screen monitor on a far wall is an all-important nod to 21st-century technology. The highlight is a glass wall that rises the full height of the space on the west side. It opens to, and overlooks, an inviting paved courtyard where timber seating encircles a towering blue spruce, just one of many prized specimens in gloriously leafy surrounds. On the east side, students spill out to a partially covered precinct that is part adventure playground /part outdoor classroom. Secret nooks and walkways encourage exploration and pathways lead onto to play equipment designed specifically for the younger girls

Colour hues indoor and out reflect the soft tones of the wider school materials palette. This extends to brick paving and sandstone-coloured exterior walls juxtaposed against natural timbers including oiled sunscreens on classroom balconies and windows. Classroom design, too, builds on the school philosophy of calm spaces that encourage group and independent learning, contemplation and experimentation.

With the younger students on the ground level, the school is divided into a series of zones – one for each year level. Tiny, dark classrooms have been opened up to create year-level learning studios, each enclosed on three sides and opening to a communal year-level space.

There’s plenty of dedicated messy areas for the little ones and breakout spaces for independent tasks or projects in small groups while a central component common to all year levels is a gathering space colour coded to the class level. Here, voluminous fabric curtains close for private meetings or mini-performances to audiences arranged on stepped seating.

The level of sophistication heightens as the classes rise in rank, exemplified by a meeting room with conference table for important Year 6 decision-making.

Today, as you visit Ruyton at 3.30pm pick-up time, girls, parents and teachers are milling, chatting and playing around the vast central hub that is their new home away from home. There is light and warmth, both in mood and surrounds. Sally Draper Architects has given Ruyton – one of Melbourne’s oldest and most respected independent schools – a new campus that is solid and lasting with an eye to a triumphant future. 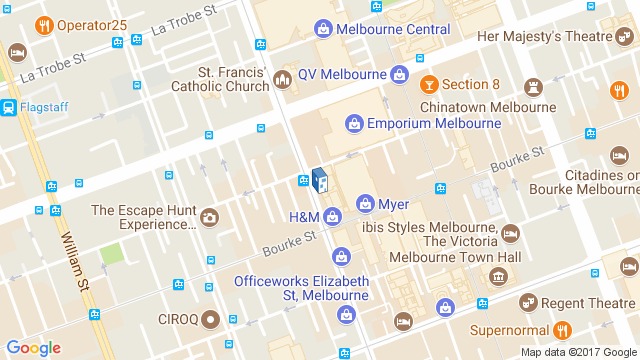