Save
Against All Odds, Photos Show Qatar's Determination to Construct World-Class City
Share
Or
Copy

The history of the Qatar Peninsula—or Catara, as first labeled on an ancient map drawn by the Greco-Roman polymath Claudius Ptolemaeus—dates back to the Paleolithic Age. By the 1930s, the tiny Gulf state was struggling to maintain its position as the center of the pearl trade, but soon after, in the 1940s, it found itself at the forefront of economic growth and progress after the discovery of its vast oil reserves. Today, Qatar is the world’s richest country per capita; its capital Doha an ever-growing crop of shiny high-rises, with occasional buildings by the world's most sought-after architects thrown in for effect, its skyline flecked with tireless cranes, and its suburbs strewn with bulldozers, machinery, and endless mounds of displaced sand.

Seen in these photographs by Manuel Alvarez Diestro is a record of the country's impatient race towards an extravagant desert dream—but perhaps it can also be read as a subtle nod towards Qatar’s sheer determination to forge ahead, despite being steeped in controversies and crises during recent years. 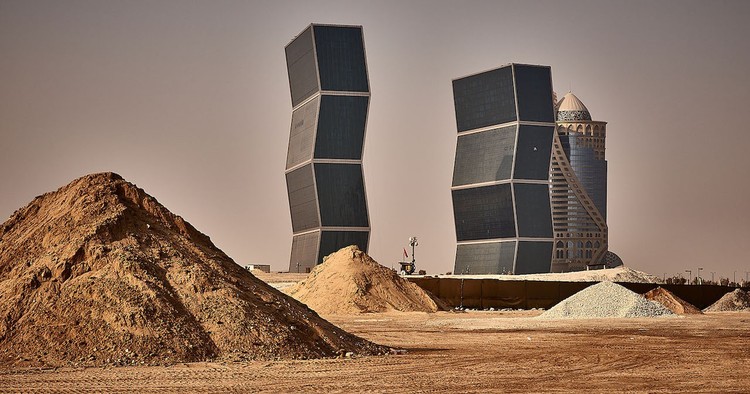 In late 2010, much to the majority of the world's outrage, Qatar won the bid to host the 2022 FIFA World Cup. Immediately deemed “the biggest football joke of all time” by the Norwegian paper Dagbladet, criticism and comments revolved around the country's soaring summer temperatures and lack of adequate sports infrastructure for a large-scale tournament. But what had won the decision committee over was the meticulous master plan drawn up by the Germany-based architecture and urban planning firm, Speer and Partners, renowned for its expertise in sustainable, human-centered design and planning. As critics delight in pointing out, the firm's founder Albert Speer Jr, who passed away in September, was the son of Albert Speer, the chief architect behind Adolf Hitler's grandiose architectural pursuits—an irrelevant yet uncomfortable fact that Speer Jr had sought to distance himself from throughout his own career.

For the 2022 World Cup, Speer Jr proposed a plan that could be easily assimilated into Qatar’s existing Master Plan 2030 drawn up in 2008; the main features of his proposal were eight new modular stadiums that could be dismantled and shipped to developing countries after the tournament ended, building temperatures regulated by absorption cooling, and an overall focus on sustainability. And so, as Qatar set aside a budget of over $200 billion for the World Cup, and the country saw itself seized by a construction boom greater than it had ever witnessed before. It also faced a sudden swarm of charges for bribery and corruption related to the bid it had just won—a mere speck compared to what was to come later in the shape of allegations of human rights violations.

Over 70% of Qatar’s total population, and 94% of the workforce today, consists of migrant workers from India, Pakistan, Nepal, Iran, Philippines, Sri Lanka, and Egypt—a glaring imbalance made all the more harrowing as one imagines the majority of those 2 million workers toiling away in the heat while the privileged 300,000 or so native Qataris are comfortably ensconced in air-conditioned glass towers or driving around in air-conditioned SUVs.

In 2014, Qatar was called a “country without a conscience” by the International Trade Union Confederation in a report highlighting the archaic Kafala system, mass deaths of migrant workers, squalid living conditions, delayed or minimal wages, poor diet and water supply, incredibly long work hours, and confiscation of passports, with workers forced to seek “black-market” jobs, or worse, ending up trapped in a foreign country. Previous investigations carried out by The Guardian, DLA Piper, and Amnesty International had already sparked anger all over the world, and in 2015, the BBC reported more than 1200 deaths of Nepali and Indian laborers between 2011 and 2013 alone. While Qatar responded with a promise to introduce improved reforms, The Guardian reported its “ongoing indifference towards systemic abuse and appalling treatment” in 2016, and more recently, the Human Rights Watch urged the government to pay proper attention to the matter.

When asked about how a city where "[...]members of the ruling class have their servants walk behind them, carrying their Dior bags" would shape up, Speer Jr remarked "We make proposals. We don't have much say." As the workers' deaths escalated, it raised some pertinent questions in the architectural world: "can architecture wield its influence to do anything to improve working conditions?" Do architects possess the agency to change anything or are they merely a bunch of worker bees at the mercy of influential clients or powerful governments? Should they even be bothered about it at all? Many of these conversations stemmed from Zaha Hadid's sharp comments about the incessant scrutiny applied to her Al-Wakrah stadium project. In response to these sentiments, among many other takes, Fran Tonkiss wrote about “the architect’s duty to construction workers,” and 1week1project expressed its stance through a powerful design for the hypothetical Qatar World Cup Memorial.

Perhaps most interesting of all though is Laura Diamond Dixit’s discussion on Qatar’s oft-forgotten slave history linked with the pearl trade, and how superficial references to the pearl divers’ traditional dhow (boat) in the design of Hadid’s Al-Wakrah and Speer’s Al-Shamal stadiums only serve to reinforce the buildings as “monuments to a long history of maritime labor.” “Hadid has famously claimed that “it’s not my duty as an architect” to think about labor," she wrote, "but the labor histories associated with the dhow can be projected back into the architectural form she has given us.”

In a somewhat similar vein, critics are quick to point out how Speer Jr, who spent a career trying to escape the dark shadow of his father's work, unknowingly ended up being the chief planner for a project that would forever be associated with human rights violations. But it’s also interesting to note how the architect’s fundamental belief in work respecting human scale, local culture and the environment, or more importantly, something that is not “statement architecture,” now stands violated as Doha's suburbs rapidly transform into the antithesis of his ideas. At the same time, it is quite hard to believe that Speer Jr did not foresee all of this—while he never built "statement buildings" in the strictest sense, it can be argued that he readily provided the blueprint for what was obvious as, from the outset, more a display of power and wealth than an innocent building project for a football tournament.

However, parallel to this, the Qatari vision also aims for a "lasting economic legacy," with sport being “part and parcel of the Qatar National Vision 2030” according to the Minister of Economy and Commerce. Strictly from an economic perspective, the merits of this rigorous exercise in development cannot be understated; with Qatar now relying less on its natural resources for revenue, and the infrastructure boom bringing with it countless investment or job opportunities, the economy will benefit. The recent diplomatic crisis, though, has brought on multiple trade or travel bans among other things, and economists are already weighing the impact that the crisis could have, in case it goes on for too long. The government, on the other hand, seems undeterred, and has utilized alternative routes for importing building materials and equipment.

The great, big dream for a world-class city forges ahead, albeit slightly slower than before. The Al Bidda Tower, better known as the “Tower of Football,” is “fitted out with Italian furniture, bespoke etched glass paneling, a state-of-the-art toilet that washes, dries and has a heated seat.” Proposals for floating hotels are reviewed, giant causeways are laid out, man-made islands with water taxis, sprawling golf courts, climate-controlled stadiums, shopping malls, water parks, aquatic centers, luxury villas, 60,000 hotel rooms with spectacular views...

Whether or not Qatar will get to host the 2022 World Cup is still up for speculation. For now, the country pullulates with newborn buildings and real-estate poetry. 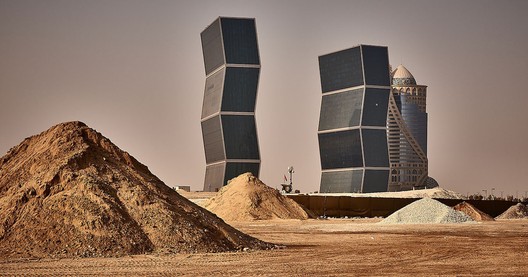