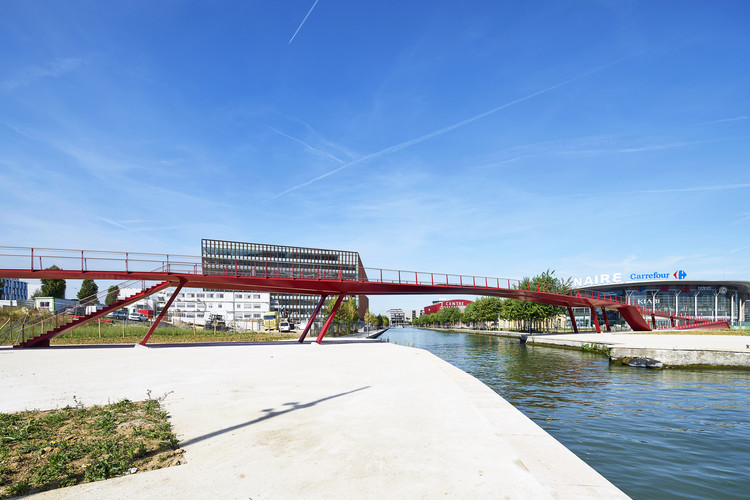 Text description provided by the architects. Le “Millénaire” is a recent mixed-used development located on the North of Paris. The development is centered around an old shipping dock which is connected to the canal Saint-Denis, Paris’ second most important waterway after the river Seine. The 180m long footbridge spans the dock in order to create a new promenade along the canal.

The structure consists of two separate decks which are linked in the middle to form a viewing belvedere. As per the City of Paris requirement, the crossing is fully accessible to disabled people and strollers without the use of elevators. The maximum gradient is 5% with landings every 10m. Each deck, including its own staircase, is a continuous steel structure supported on inclined pinned columns. Approach ramps and abutments at each end of the bridge are built in reinforced concrete.

The decks are formed with 2.5m wide steel boxes. Their depth is constant for the approach spans (11,5m typical) and variable for the 42m main span (with a 35cm depth at midspan). Despite their slenderness, the steel decks include conduits for utilities as well as tuned mass dampers for dynamics. The bridge parapets emphasize lightness with a transparent stainless steel mesh. At night, miniature round LED fixtures are built in the stainless steel handrails and the large bench at the central belvedere.

The footbridge is painted a bright red (steel and concrete structures, deck surfacing and parapet posts) in order to create a visual landmark on this former industrial site marked by terracotta buildings. The color is also a reminder of the infamous architectural Follies of the nearby Parc de la Villette by architect Bernard Tschumi. 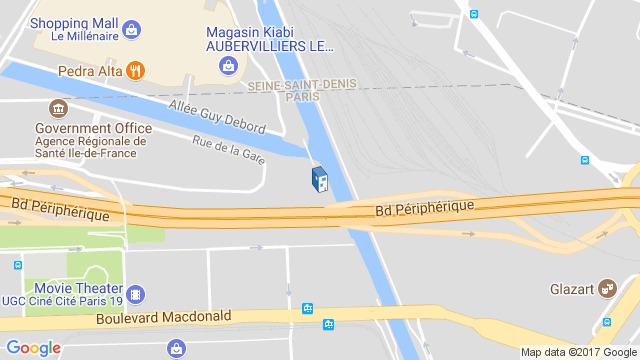