Save
The Evolution of Light in IM Pei’s Museums, from Dark Concrete Voids to Luminous Glass Pyramids
Share
Or
Copy

Although the Louvre pyramid, often recognized as his masterwork, created a luminous icon for presenting culture, IM Pei’s early museums were characterized by the harsh shadows of brutalism. Project by project, the Chinese-American master developed a sophisticated, open architectural language. Pei’s holistic approach for welcoming museum visitors comprises powerful symbols which utilize sunlight to its fullest during the daytime, while employing the magical glow of illumination in the evening.

Whereas most assessments of the Louvre have praised the achievements of the luminous pyramid as seen above the ground, the actual design challenge laid underground, in offering visitors a successful underground space. Later, Pei transferred his language to multiple other museum projects, where light was always a key factor in defining museum experiences. In a year of celebratory events such as “Rethinking Pei: A Centenary Symposium,” which begins tomorrow at the Harvard Graduate School of Design, an examination of Pei’s use of light in museums can contribute an important cultural emphasis. 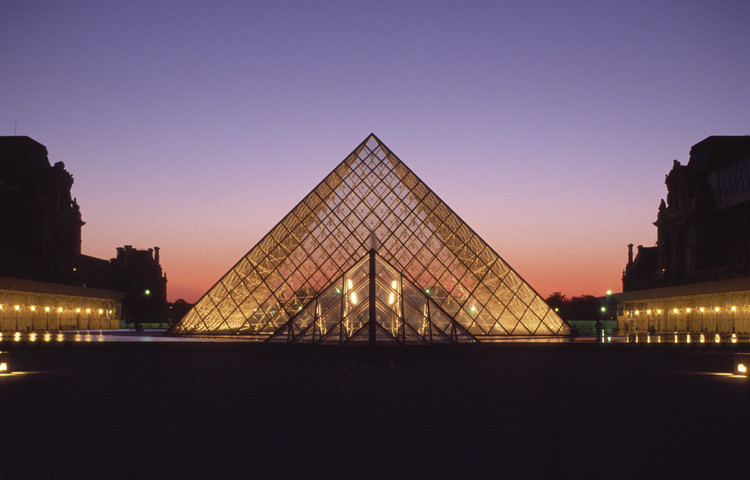 Brutalist Boxes Brought Together in Light

The imagery of IM Pei’s museums shows vividly how his imagination has shifted over time, from an intense play of shadows with cubes towards complex glossy reflections with light-flooded spaces. This observation is not limited to the exterior façades but also applies to the buildings’ entrance zones. His Everson Museum (Syracuse, 1968) anticipated the debate surrounding museum buildings which act as giant sculptures and break the long tradition of classical imagery, as epitomized by Frank Gehry’s Guggenheim Museum in Bilbao.

In Syracuse, cantilevered boxes separate the museum façade from the ground through intense shadows; Pei was fond of early cubist sculptures and how light contributed to the perception of form. “Without the play of light, form is inert and space becomes static; I would like to think that when I design buildings light is one of my first considerations”, remarked Pei in a conversation with writer Gero von Boehm. Gaps between the cubes enable some daylight to enter the central entrance space at the Everson Museum. The massive waffle-slab roof rests heavily above the central court, with its bush-hammered concrete creating a dimmed atmosphere. Details like the central monolithic spiral staircase—which will reappear later in an elegant form at the Louvre—have also been included in the strict concrete environment.

In contrast to the horizontally-oriented Everson Museum, the sloped terrain at the Cornell campus led to the decision for a vertical concrete museum. The clustered volumes at the Herbert F. Johnson Museum of Art (Ithaca, 1973) have a higher level of perforation. Compared to the Everson Museum, this tower engages long views and invites sunlight to flood the exterior sculpture terrace from different directions. Pei paid close attention in order to avoid the common problem of museum fatigue caused by rows of monotonous exhibition spaces. He enriched the movement between the windowless art galleries with spaces where daylight offers points of rest, animating the museum experience. Nevertheless, the museum requires visitors to approach through intense shadow below a heavy cube to reach the entrance before encountering the illuminated artwork—a gesture which shows vestiges of Pei’s approach at the Everson Museum.

The East Building of the National Gallery of Art (Washington, 1978) marked an essential shift towards transparency in Pei’s museum design language. This was the moment that he introduced glass pyramids for the first time. The seven small, scattered crystal skylights on the plaza harvest natural light for the underground concourse linking the East and West Buildings. Originally Pei designed a brutalist concrete ceiling for the central atrium similar to his previous museums, but studies revealed that this created a depressing atmosphere in the monumental space. As a result, the ceiling was opened to daylight with a triangular space frame system spanning the atrium including tubular bars to reduce the glare. The distinctive new patterns etched by the sun brought a pleasant counterpoint to the uniform atrium surfaces.

Before his breakthrough with the Louvre entrance, Pei also used the glass pyramid motif on two commercial buildings. At the IBM Somer Office Complex (1984) he welcomed the company’s clients with a large elevated glass pyramid between two triangular buildings. Due to the reflective glass coating, the mirror image of the sky overpowers the effect of transparency, obscuring any inside view and leaving a monumental impression. In contrast, the octagonal pyramid at the entrance pavilion of the IBM Headquarters (Armonk, 1985) is located at the front of the main building, but in this project it appears more like the roof of a two-story pavilion than an iconic, grandiose form.

Transforming the Egyptian Archetype into a High-Tech Modern Pyramid

By copying the 51-degree angle of the Great Pyramid at Giza, Pei reproduced a famous icon and symbolically reinforced the Grand Louvre’s pursuit of high culture. At the same time he modernized the antique symbol with transparent glass. Providing a counterpoint to the iconic main pyramid, Pei also added an inverse pyramid and surrounded them with grass and water, intensifying the Egyptian metaphors of life and death. However, from a functional point of view, Pei sought a solution in which he could create an optically minimal volume in the main courtyard for the new entrance, respecting the existing buildings. During the daytime, the sides of the central pyramid reflect the sky. The surrounding water creates a reflecting pool, underlining Pei’s desire to create a light atmosphere and to dematerialize the Egyptian symbol. Even from the underground entrance, visitors can enjoy the view to the surrounding historical Louvre facades. The filigree construction on the underside has turned the icon into a high-tech element, and at night the pyramid appears like an urban jewel in the city of Paris.

Converting an Opaque Archetype into a Sparkling Diamond

For a striking image at night, Pei worked alongside the American lighting designer Claude R. Engle to create a solution in which the pyramid would not create any dominant reflections which would interfere with the views in the courtyard or from the basement to the surrounding facades. As the pyramid does not span the complete court, the designers searched for a strategy to create an illusion of daylight in the underground areas which are too far away from the pyramids.

Claude Engle was aware that the eye alone determines the impression of in a space: this process is not based on measuring the illuminance level but on the brightness perception of the space, in which walls are a key contributor. This simple principle requires that lighting designers illuminate the vertical surfaces surrounding the space. Additionally, our eyes are used to a graduation of brightness from high levels down to the ground, which feels natural to us. As a consequence, Engle highlighted the pyramid as a prominent eye-catcher, and created a bright basement with the impression of a luminous ceiling and vertical illumination. Because glass itself cannot be illuminated, Engle used grazing light for the delicate supporting structure of the glass pyramid. For the ceiling of the entrance space, Pei reproduced and multiplied the pyramid in a much smaller size. By illuminating two sides of all these concrete pyramids, the visitors receive the impression that the bright sky is extending into the interior. Uniform wallwashing completes the setting of the underground entrance.

Transferring the Pyramid into a Contemporary Context

After the successful addition of the glass pyramid as a counterpoint to the renaissance Louvre façades, Pei used his new icon and daylight approach for two projects in the 1990s. For these museums he set his entrance glass structure in a modern context, unlike the historical setting of the royal palace in Paris. The glass façade for the lobby of the Rock and Roll Hall of Fame and Museum (Cleveland, 1995) demonstrates a stunning similarity to the Louvre pyramid. The slightly staggered tetrahedral glass tent looks like two glass pyramids when accessing the building from the front—the front one whole, with a truncated pyramid. The scale and grid of the glass pattern continues on the other solid volumes and unites the composition, forming an expressive icon for music culture. However, this building holds a stronger relationship to controlled cubism than to the roaring beats of Rock and Roll.

For the later Japanese Miho Museum (1996) Pei chose a rather subtle dialogue with the surrounding landscape and regional architecture. Delicately filtered daylight passes through the glass structure and creates a luminous impression in the spaces, especially the grand hall. “In the beginning the shadows bothered me,” admitted Pei in his interview with Gero von Boehm. “But now I no longer worry about it, because the shadow patterns change all the time. In fact, I find the constantly changing pattern quite fascinating.” At night the pavilions emanate a warm glow like lanterns—here more scattered in comparison to the one luminous pyramid in Paris.

After 2000, with time after the design of the Louvre, Pei’s museums began to reveal different reinterpretations of his trademarks of pyramid, glass, and stone. For example, the extension of the German History Museum (Berlin, 2003) grabs attention with its exposed glazed spiral staircase. The glass entrance welcomes visitors, without historicizing features, on the magnificent “Unter den Linden” boulevard. Even the entrance to the basement via a tunnel from the adjacent building involves daylight. On the top floor, tetrahedral ceiling bays with a special luminaire on the apex indicate an obvious link to the grid pattern of the Louvre ceiling.

The Musée d’Art Moderne / MUDAM (Luxembourg, 2006), superimposed on the ruins of a fort, plays again with historical symbols: the glass lanterns on top of the translucent pyramids link the solid Egyptian pyramid with the motif of a fortress tower. Materialized in glass, they lift the cultural site into modernity and leave the past of the dark fortress behind. When the museum is illuminated at night, people see a light on the hill, providing an attractive force at night.

In contrast, the Suzhou Museum (2006), as Pei’s first museum in his home country, avoids large iconic gestures. Instead, the subdivided composition includes multiple ascending roof patterns linked to traditional Chinese motifs with smaller glass openings for daylight and views. Finally, Pei’s last major museum project, the Museum of Islamic Art (Doha, 2008), quotes traditional Islamic design patterns, visible in the skylight of the Museum. Sensitive to the intense sunlight in the Middle East, here Pei has avoided large openings to the sky and grants the visitors a shaded representational entrance to the world of arts. The faceted, sky-lit dome in the central atrium plays with the different shades and finally confirms Pei’s turn away from his early cubic brutalism. 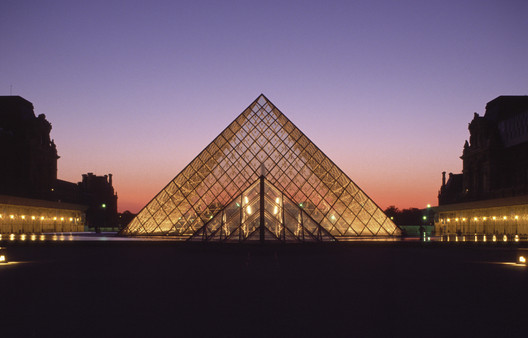