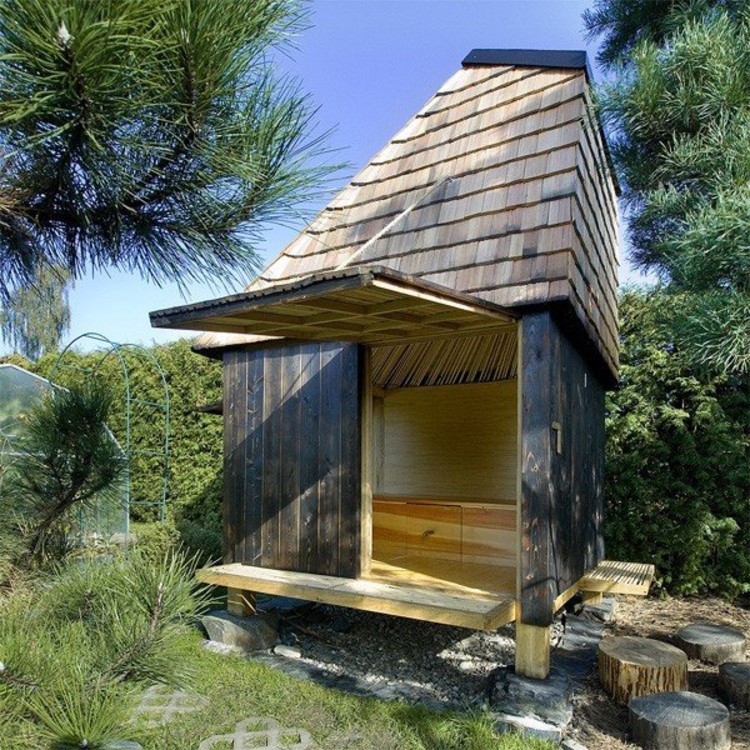 "Hat" is the third tea house we have realised. It is a small house to gather with a cup of tea, a tiny haven under the open roof in little charming garden. The minimal space of a teahouse is a great challenge for us to search for intimate and pleasant space, which brings unique atmosphere with its own secret inside. The inner space of tea house gives distinct perspective of the outside world.

"Hat" is the smallest of the three already designed teahouses. The name derives from its tall roof resembling a big hat in the garden. Its inner space is meant for 2 guests and a host within dimension of 1,8 x 1,8m. The seating is suit to its owners, so guests can enjoy sitting on wide larch bench.

The Hat has expressively dwarfed rooflining, the almost square layout transforms upwards into the round shape of skylight. Hearth is designed due to the minimal size of space as a drawer hidden under the bench. The main view is oriented to unique picturesque garden towards bizarre horizont with grassy coal waste dumps of Ostrava outskirts. The view could be adjusted by sliding windows and outter shutters.

Material plays important role when designing a teahouse. We search for natural ageing materials which makes the space warm and liveable. The carpented oak structure stands on dark grey stones, which harmonize with dark larch facing and shingle roof. The main inner wall is clad with oak plywood. All the structure was realized in summer 2010 by sculptor Vojtěch Bilišič.

Big inspiration for all of our tea houses was personal meeting with Japanese architect Terunobu Fujimori and an experience with his own teahouse Takasugi-an in Nagano prefecture. As in our previous teahouses we tried to find our own interpretation of the theme, which intentionally differs from Japanese tradition a lot. We transfer it into a local situation using traditional materials and forms of Middle Europe. 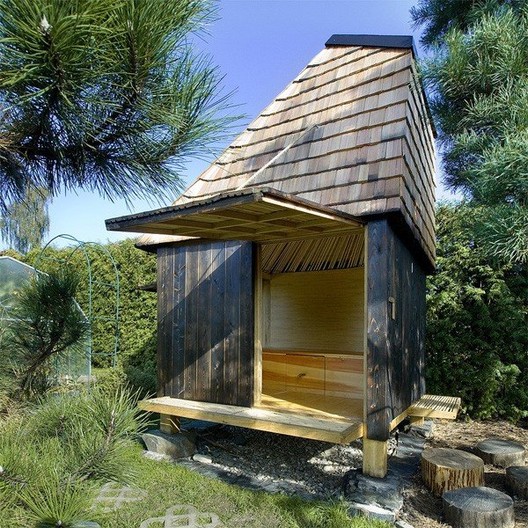