All
Projects
Products
Events
Competitions
Save
Welded Steel Wigwam by studio:indigenous Connects Past to Present at Exhibit Columbus
Share
Or
Copy

In this video, Spirit of Space visits Exhibit Columbus to see Wiikiaami, a parametrically designed structure by studio:indigenous. Beginning in 2016, Exhibit Columbus is an annual event which invites people to travel to the small, but architecturally fascinating Midwestern town of Columbus, Indiana. Free and open to the public through November 26th, Exhibit Columbus displays 18 unique, site-responsive architectural installations.

For this year's event, a jury of international and local leaders chose Wiikiaami as one of five total Miller Prize winners winners to be featured at Exhibit Columbus, with the studio:indigenous structure selected to be shown on the site of the First Christian Church designed in the 1940s by Eliel Saarinen and his son Eero.

Wiikiammi connects past to present. The design was derived from traditional wigwam construction, using bent rods and overlapping patches of outer cladding, but was fabricated with modern materials such as welded rebar and waterjet cut metal panels. The film, narrated by studio:indigenous founder and architect Chris Cornelius, explores the design and construction process of Wiikiaami.

Share
Or
Copy
About this author
Lindsey Leardi
Author
••• 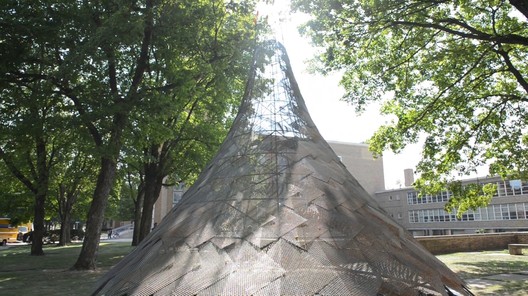