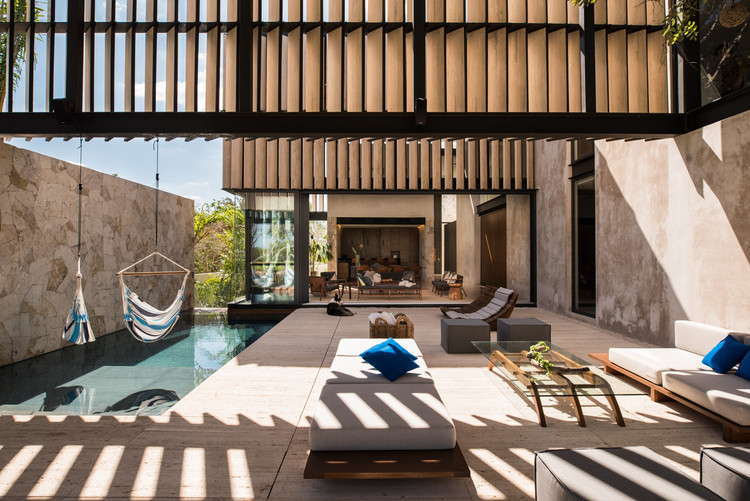 Text description provided by the architects. Architecture approaches nature by rearranging its elements. In Casa Chaaltun, this conformation was an attempt to evoke and interpret the natural and cultural context of the Yucatan Peninsula, in Mexico, challenging the mainstream perception and common use of its natural materials.

To adapt the program into the lot’s geometry, it was divided into three zones: private, social and services; the volumes were designed accordingly. Four volumes are connected by a main long axis, which is the project’s spine. Two of them are solid, facing south and west, solving the privacy and, at the same time, it protects the interior and shadows the others. The remaining volumes are lightly floating, generating a double height ceiling in the ground level, facing to the northeast.

The volume’s typology is characterized by its facades. The solids are formed by a series of offsetted walls, allowing crossed ventilation and a great natural light income without a thermal gain. In contrast, the floating volumes feature a marble lattice facade, permitting the entrance of a diffuse light and also shadowing the interior.

The marble lattice facade was a challenging design and its final solution gave identity to the house: a system formed by four hundred eighty six vertical pieces, each one unites two plaques of marble secured to a steel frame. Every single piece is welded to the main structure of the social volumes. The lighting is inspired in the moonlight, so that each piece illuminates the adjacent, bouncing its light into the marble.

The volumetric solution comes with a continuous series of voids in the building: four spaces that open and expand the interiors; although this is functional, these are also the spaces where the natural and cultural references of the environment take place, giving Casa Chaaltun its unique identity.

Yucatán Peninsula is known for its peculiar landscapes, which include large trees with tabular roots and natural ponds of crystalline water called cenotes (dzonoot in maya); this ponds are of remarkable beauty and characterized for its freshness; the limestone that forms the cenote allows to see the dark green and blue colors in the clear water. Because of this natural and stunning ponds, the swimming pool resembles a cenote: an oxford grey flamed granite gives a sensation of depth and a darker green-blue color to the water; floating in the second level the marble lattice façade encloses the pool area. Also, Alamo trees suggest the presence of a cenote, this is why one of them is placed in the access patio surrounded by limestone walls.

In the regional landscape of Yucatan it's common to see how rocks, roads and walls rust in an intense red color because of the minerals in the soil; the inspiration for the red patio was taken from these rusty elements, making tall tinted concrete walls and placing a Chaka tree (regional tree form Yucatan known for its red bark). Another endemic tree in the plot is a Jabín (habín in maya), one of the few in the area that changes its color through seasons. This tree was a breaking point to the design of the master’s bedroom lobby and the upper level terrace, where the leafy branches brace the space giving a cozy ambiance.

All these different references of the natural context are a constant in the project, following the same line of design and always prioritizing the user’s well being and playing with the aperture of the sequenced spaces. Casa Chaaltun is the concatenation of thresholds (kitchen-bar-social-pool-garden) that opens into an extended visual (course-lake-course-jungle).