At an altitude of 3,800 meters, Ice-Age architects have designed and produced a compact and lightweight shelter as the last base before climbers venture up Mount Elbrus, the highest point in Europe. Inspired by Buckminster Fuller's 2V geodesic dome, it can sleep up to 16 people as they acclimatize to the altitude and wait for the appropriate weather for the climb. 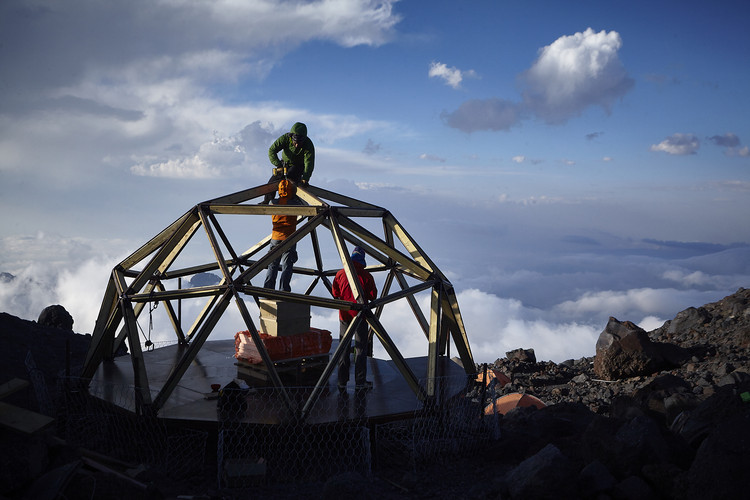 The geodesic dome, defined by the shortest paths between two points on a sphere, was originally popularised by the American architect, inventor, and engineer Buckminster Fuller. His revolutionary work in the 1940s for solving the housing problem led him to develop the infamous dome structure by replicating "nature's own coordinate system" found in spheres such as molecules and planets. By breaking the linearity of traditional housing, Fuller discovered the efficiency of the sphere from a minimum surface to volume ratio, that consequently minimized heat loss through the fabric of the building.

Shelter 3800 takes advantage of the dome's capabilities for the harsh environment it is located in. The dimensions of it are the maximum possible using standardly sized materials whilst the frame is compact and lightweight.

In such an isolated location, the transportation of the pieces had to be heavily considered in the design process. Most of the boxes were flown in by helicopter with a strict weight restriction of 500kg per package; each individual part also had to be no more than 20kg in case of strong winds when setting up. As part of the unique packing system, the packages only needed to be opened after the previous design stage had been completed for ease of assembly.

Another issue caused by the moraine the shelter is built upon was the continuous movement of the glacier. Adjustable support legs attached to gabions allows the structure to compensate for the difference in terrain level.

NewsMiscGeodesic DomeShelterRussiaWoodMaterialsIce-Age
Cite: Ella Thorns. "Lightweight and Compact Shelter Is The Last Base Before the Climb to the Highest Point in Europe" 21 Oct 2017. ArchDaily. Accessed . <https://www.archdaily.com/880530/lightweight-and-compact-shelter-is-the-last-base-before-the-climb-to-the-highest-point-in-europe> ISSN 0719-8884
Save 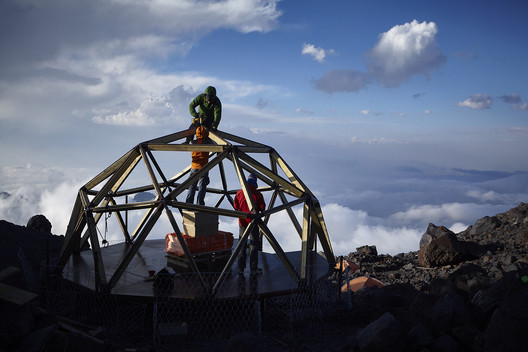