An 18th century baroque palace in Karlsruhe, Germany has become the canvas for a dazzling light mapping projection in the latest project by Zaha Hadid Architects.

Named “Behaviour Morphe,” the projection display was created in collaboration with composer Max Cooper and leading digital artists Andy Lomas and Mubbasir Kapadia for the city’s 2017 Schlosslichtspiele Festival, exploring how digital spatial concepts could shape the living spaces of the future.

Projected onto the 170-meter-long front facade of the castle, the light show was calibrated to react to the palace’s unique architectural elements, revealing and obscuring areas based on real-time data.

“The projection on the castle’s façade reveals its interiors as digital laboratories of human behavioural simulation, demonstrating the circulation and congregation of digital actors programmed with artificial intelligence that interact with the spaces of the castle and each other,” explain the architects.

“Dynamic new virtual spaces are defined by using real-time data to interpret the virtual actors’ interactions. These digital spaces are then explored with iterative growth systems that emulate the evolutionary process of nature, demonstrating the potential of metamorphic simulations and digital morphogenetics.”

The project was produced by ZHA’s Computational Design research group (ZH CODE), which is exploring how to “apply exciting and contemporary research to address locally relevant issues and to understand and assimilate traditional wisdom.”

“ZHA's ideas and work fit well with my musical approach, being based on human/machine boundaries, and emergence of biological forms from simulated systems of behaviour,” said Cooper. “I drew on a couple of tracks which fit the visual style and the development of the piece, which goes from a playful exploration of human interactions with an architectural space to a barrage of cellular forms and audio-visual intensity.

“I spent a lot of time working on the sound design to score each tiny event and ripple of visual processing to sync with the mapping across the front of the castle.  From my perspective, the crux of the piece is in this synchronisation, bringing the sound to life through the painstaking and in-depth simulation and generative computational approaches of the visuals.” 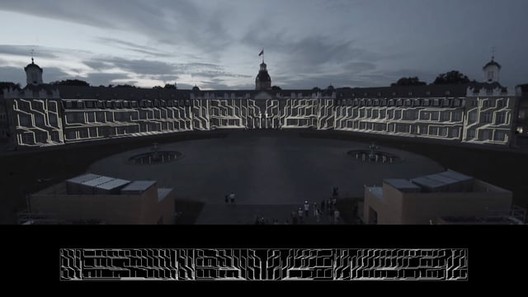