“Plyscraper,” “woodscraper,” call it what you will, but the timber age is upon us. Brock Commons Tallwood House, the recently completed student residence building at the University of British Columbia (UBC) in Vancouver, now occupies a prominent position within architecture: the tallest building with a timber structure in the world. 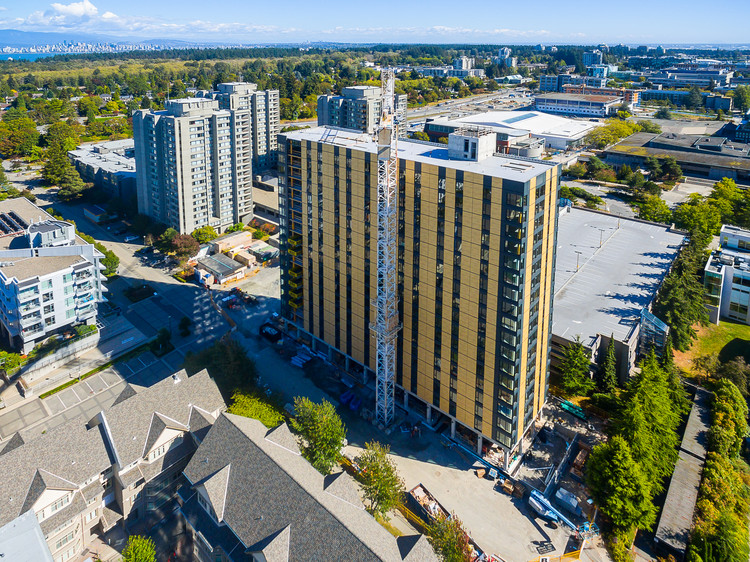 Designed by the Canadian practice Acton Ostry Architects Inc., the project was a collaborative effort of a number of leading companies and consulting firms including Fast + Epp, Austria-based Architekten Hermann Kaufmann, and GHL Consultants Ltd., along with the renowned manufacturer of mass timber products and packages, Structurlam.

“We found that working with wood, we could reduce timelines for construction. The assembly of the wood structure went up incredibly quickly, faster than we even expected”, explained John Metras, Managing Director of Infrastructure Development at UBC.

Stretching up to a height of 53 meters, the building houses 404 students and comprises a mix of one-bedroom and studio units, study and social spaces, and a student lounge on the topmost floor. With the design and construction team working in tandem from the very beginning, the process was streamlined by a thorough testing of wood-to-wood connections on a two-story mock-up prior to on-site construction. This not only allowed the team to test structural stability, but also helped perfect the timeline of the project.

Even more pertinent to the prefabrication process was a detailed 3-D model, which helped various departments to collaboratively discuss and apply ideas prior to finalizing them for actual fabrication or construction. Owing to meticulous planning and the efficient integration of construction and design processes, Brock Commons was completed within a mere 70 days after the prefabricated components were ready for assembly – considerably shorter than the amount of time it would have taken to complete a concrete building of the same size.

Surprisingly though, despite wood being the main material used throughout the structure, the interior does little to reveal it. The structure is concealed behind drywall and concrete topping, mainly to comply with the accepted fire-safety codes and consequently speed up approval from building authorities. While Brock Commons could attract some criticism due to this particular aspect, the pros of the mass timber model still seem to outweigh the few cons. Not only is it economically viable, but when coupled with sustainable forest management, represents an altogether environmentally friendly method of building. It is light-weight and hence less prone to damage during earthquakes, but most importantly, due to the prefabricated elements involved, it is a speedy, hassle-free construction process contributing next to nothing to on-site traffic, pollution and noise.

Recent technological developments have certainly allowed for more efficient building processes and materials. More and more architects now rally for timber instead of concrete and steel, persuaded by its proven success and in reaction to the ever-mounting issue of climate change at hand. Several mass timber projects are already underway across the world including Shigeru Ban Architects' plans for Terrace House in Vancouver. Once complete, the structure will surpass Brock Commons to become “the tallest hybrid timber structure building in the world”.

For more details of materials and the construction process of Brock Commons Tallwood House, check out our coverage of the project from last year:

The world's tallest timber tower has topped out this week, standing 53 meters high in the Vancouver skyline. The 18 story building, designed by Acton Ostry Architects, began construction in November 2015 and has since opened the floodgates for a new wave of mass timber towers.