With construction well underway on the redevelopment of Stockholm’s Slussen interchange, one of the city’s busiest transportation hubs, the final building of the masterplan has been launched by the City of Stockholm and Foster + Partners.

Located at the focal point of the overall masterplan envisioned by Foster + Partners with Berg Arkitektkontor, landscape designer White Arkitekter and lighting designer ÅF, Mälarterrassen (named after Lake Mälaren, the large freshwater lake upon which much of Stockholm is located) will provide three levels of mixed-use space to re-invite locals and tourists alike to an area of the city previously dominated by automobiles. 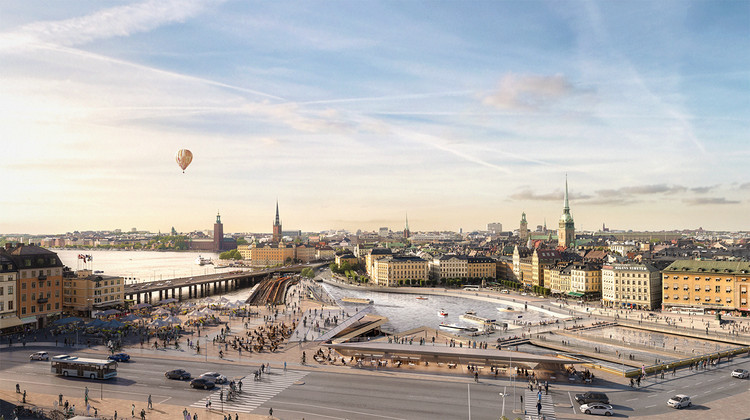 “Mälarterrassen will be a new destination for Stockholm, with markets, cafés and restaurants, linked by pedestrian routes directly to Gamla stan. In addition, this permeable and lively new city quarter will also be a spectacular new venue for performance and art,” said Spencer de Grey, Head of Design, Foster + Partners.

The building will serve as a key connecting point between the elevated landscape of Södermalmstorg to the south, the boat locks below and Gamla Stan (the old city) beyond with 24-hour elevators and escalators. Public terraces will open up views toward both sides of the locks, while glazed surfaces behind will allow northern light to penetrate internal spaces. The “intelligent” building facade has been location-specifically designed to adapt to summer and winter climates.

"Mälarterrassen signals the city's ambition to make Slussen a new meeting place for the city. Ideas from the public, obtained from the detailed planning process, are reflected in the project proposals. The new building is lower and less dominant than previous proposals and will be publicly accessible to all," added Roger Mogert, Culture Minister of the City of Stockholm.

Mälarterrassen is expected to complete in 2025. Learn more about the Slussen redevelopment plan, here. 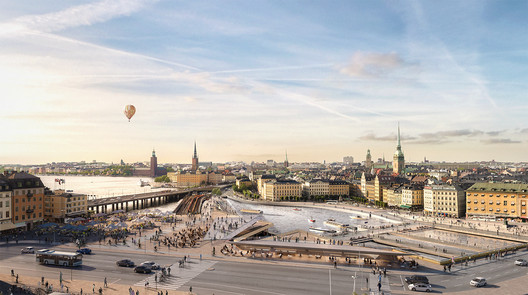